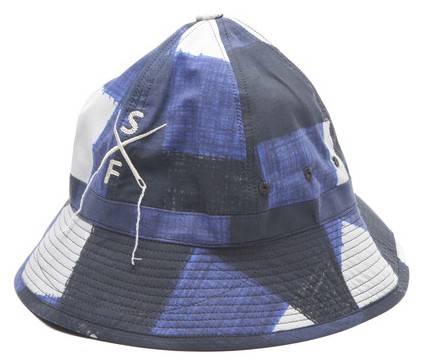 Seems like bucket hat sightings are becoming more frequent. They’ve been a thing for some time – as regular readers will be more than aware. At least they have in my self-indulgent world. Appears they’re spilling into the actual world. For me though (and we’re getting into bucketary specifics here) the  old-school, pyramidal shape – as ‘busted’ by LL Cool J et al – is not the vibe – contrary to the Sunday supplements and other late comers. The vibe is in fact, a more Japanesey, floppy affair as mastered by The Superior Labor. Re-issued Filas don’t cut it round these parts.

I can excuse the vaguely pyramidal shape of this Sasquatchfabrix hat though. I mean, look at it. There’s no way you’d mistake this for some 90s-glancing wannabe. I’ll all about that bonkers-ass check and the killer detail? Check the needle logo with the cast off stitching hanging off. That’s some sanity right there.

I’d say just buy this magnificence. But every time I buy a hat online, without trying it on beforehand, I end up looking like the guy who fires the big gun on the Death Star. Buckets are often much more massive than you expect, and sticky-uppy, and baggy, and just rank stupidness. But if you still haven’t got one, buy this one quick and just ignore everything in the preceding sentence.