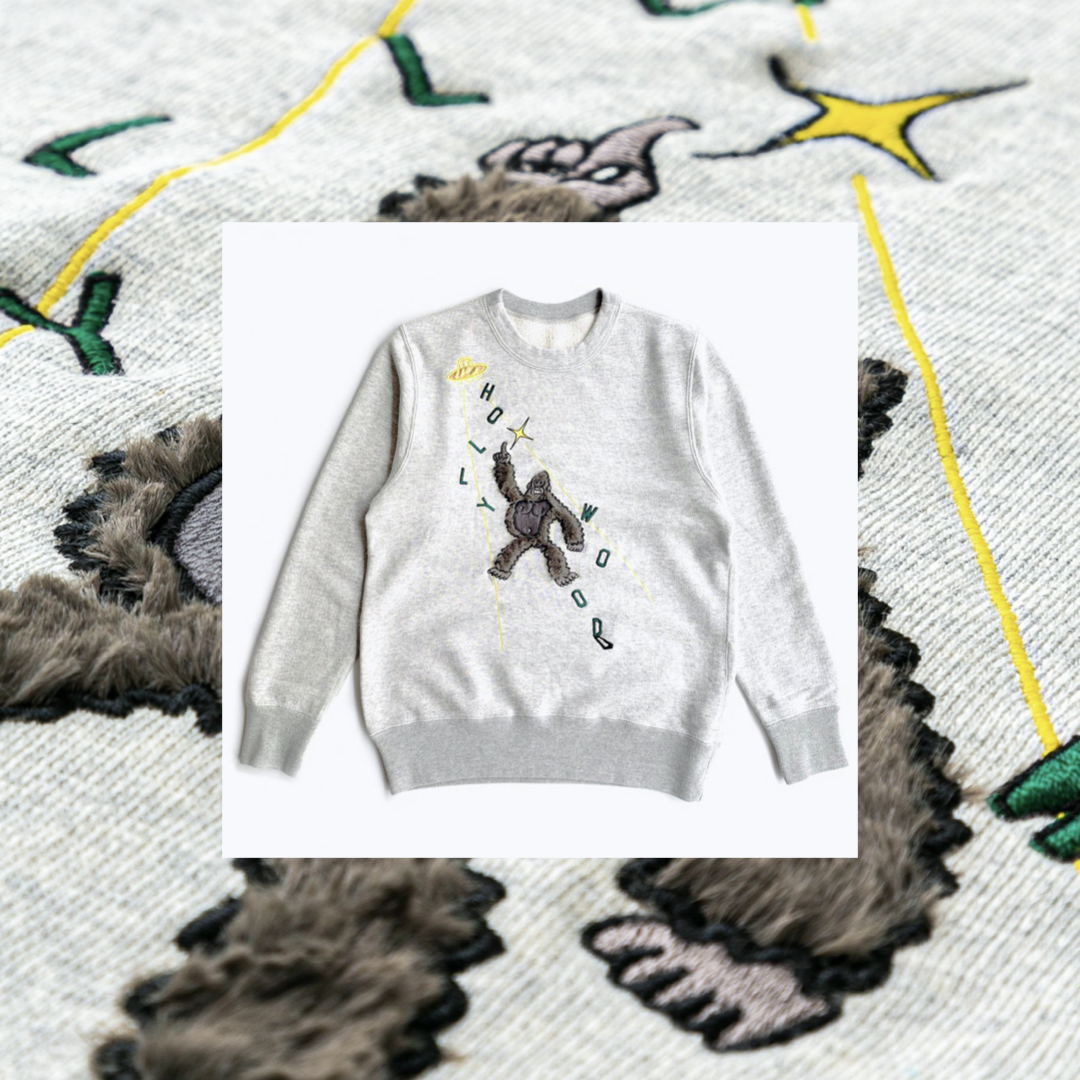 We can think of embroidery as print’s older, more sophisticated sibling. Everyone’s at it these days, stitching-on a sense of luxuriousness to simplistic and otherwise mundane pieces.

Increasingly we see embroidery aping the ‘naive school‘. Crude and crafty, like this piece from (yesterday’s spotlighted brand) Heresy. This is clothing reflecting back our DIY digital culture — where any Herbert can scribble something into Procreate and (amongst the right peer group) be hailed a genius. Of course, there’s nothing wrong with that per se  — I happen to enjoy cosseting my own graphic experiments within the auspices of the naive school. But there is embroidered life beyond the homemade. And these new sweats from Japanese brand Bru Na Boinne illustrate the point.

Unlike print, there’s a sense of permanence with embroidery. It won’t begin to fade after a few washes. So like a tattoo, it’s a good idea to be pretty set on your choice of artwork at the outset. The Bru Na Boinne sweats come in four different flavours, and if there’s a unifying theme I’m missing it. One depicts a bear and a fish and represents Alaska. Another has a ‘scrum’ of black sheep — something to do with New Zealand and presumably the sport of Rugby Ball. The third has a car full of bikinied hotties. Which logically leaves the final one to depict King Kong dancing to Saturday Night Fever.

But if this magpie-like cultural pilfering makes little sense, at least the style of embroidery joins things up. There’s a real 3D feel going on, with liberal use of furry material making the animals pop from the jersey.

I bought something similar ages ago. London’s Present (RIP) convinced me Brooklyn We Go Hard were a thing (anyone remember them?) so I dropped on an embroidered sweatshirt with an eagle on it. I think it’s in a vacuum bag under the bed.

I do think these Bru Na Boinne pieces are a different level, but as I said at the outset, you’ve got to live with your choice. What might seem an amusingly furry bear now, might end up something you curse as you aggressively button your jacket over it. I mean, what kind of man wears a King Kong sweatshirt? Or a Cadillac full of ladies? What messages are being sent? If I wore a top with black sheep and a rugby ball on it, people might think I tolerate sport. And that simply won’t do at all.