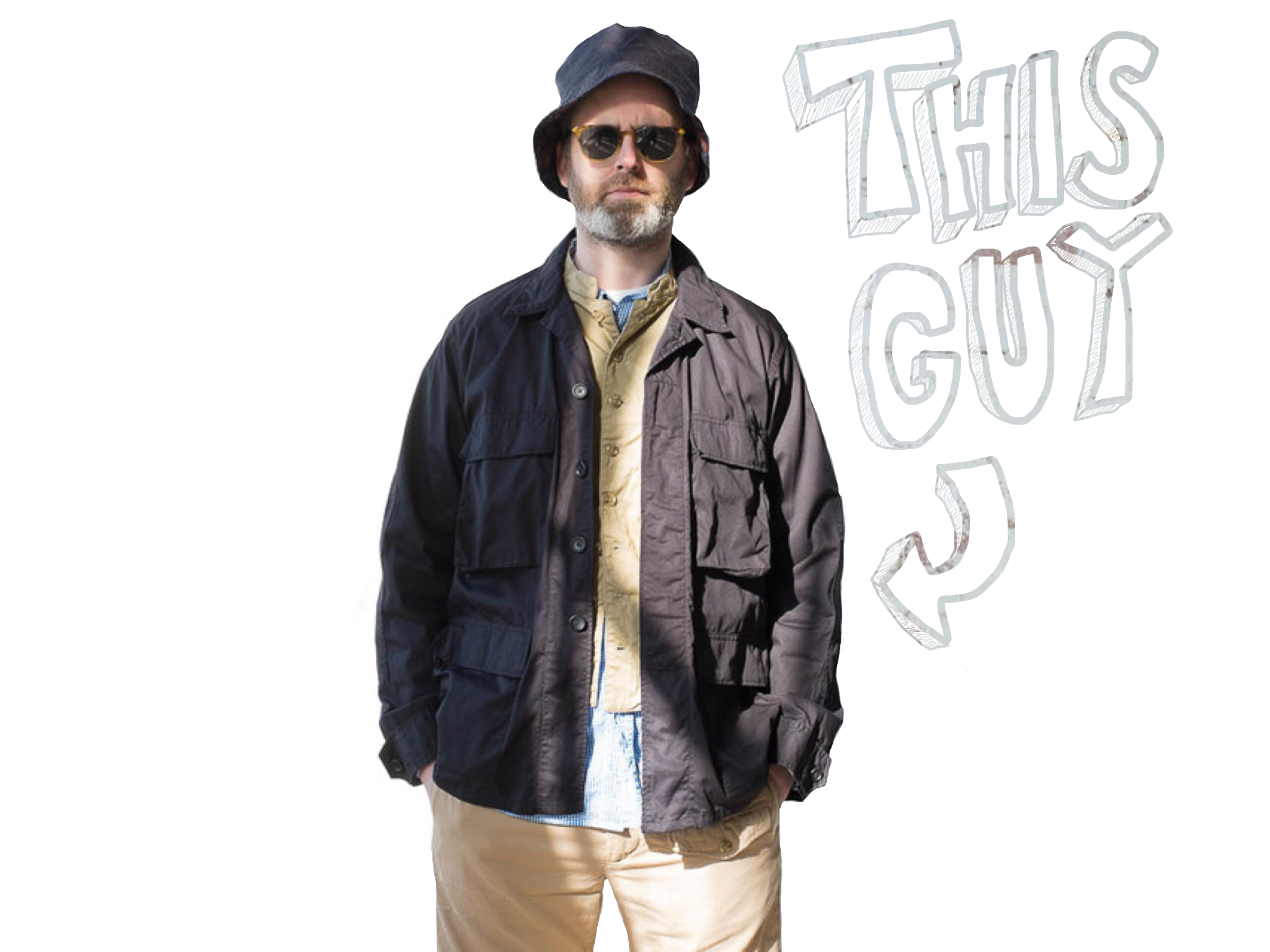 This guy models for The Bureau. If you’ve visited this blog before, you’ll know The Bureau – menswear shop, based in Belfast, massive range of premium imported brands. The Bureau Man is always popping up in ‘how to wear’ shots throughout The Bureau’s webstore. I have no idea who he is. He might be a professional model, a customer of the shop, he might own the store for all I know. But, make no mistake, he is the most important dude in menswear right now. Here are ten reasons why he rules:

1) He has no fear
Balls alive this dude has shown us the future. No outfit is too bonkers, no combination too uncombinable. He’s happy to garb-up in the myriad complexities and unfathomables of Japanese clotheswear and put it all out there. Whether he’s dressed as an off-duty train driver, or a bicycling Nintendo character, he does it with utter integrity. He’s like a method model. I genuinely think, at the moment that shot was taken, he was a bicycling Nintendo character.

2) His hatsmanship is off the charts
Only the fearless and foolhardy would dare to don the Ghandi hat. You can tell, he knows it too. It’s taking all his concentration to pull it off. But it is a reflection of this dude’s ability, operating at the highest level of menswear, that he succeeds.

3) He’s an inspiration to a man of years
He’s got a bit of grey in his beard. So have I. Now, I don’t know how old he is. I think I’d rather not know. But genuinely, I see him as an inspiration to men, outside their 20s say, who still enjoy the seductive pleasures of the cloth.

4) His lifestyle is a mystery
I imagine that, when he’s not modelling for The Bureau, he hangs in his loft, surrounded by Portmeirion crockery, Boro throws and first editions. He’ll get a call from his squad (on an original 1970s trim phone) toss on a artfully crumpled Kapital overshirt and hit the local pub, for ales, darts and a vibrant debate about Renaissance literature. He’ll have some left over Swiss chard, chickpea and tamarind stew to heat up when he gets in, before re-watching The Flipside of Dominick Hide for the Play For Today Encyclopaedia he’s been paid a giant advance for.

5) He’s happy to share the spotlight
Sure, the bro can work alone. But he’s equally comfortable wearing clothes, while standing next to another man wearing clothes. That’s levels son. It takes years to pull that off.

6) He’s versatile
Whether he’s called upon to gaze thoughtfully out the window of an abandoned loft, or stride purposefully past a fire escape in a huge floppy hat, this guy has it on lock. I’m not sure an environment has been invented that this guy couldn’t successfully wear clothes in.

7) He’s basically the lord of EG
Season in, season out, he’s blowing up in Engineered Garments – the label of prestige for bros demanding a style that’s sympathetic to the street and antagonistic to the wallet. This guy has worn everything EG have ever done, in every combination mathematically feasible. Every hat, gilet and jacket combo, exhaustively researched – so you, the shopper, can marvel at the desirable maddery of it all, before dropping on a plain navy blazer.

8) His look suggests that ‘having a job’, is just something other people do
Shorts and jackets. Shorts and nightshirts. This guy doesn’t get out of bed for less than… when he fucking wants to. The only job in existence that these looks are appropriate for is Head of Looking Straight Fire at the Academy of What The Fuck You Looking At? The job’s his.

9) But remarkably, he still knows how to dress for a job interview
Bit dandy for that B2B Telesales Exec role? Not a bit of it. In this getup, our man would maim the interview and in six months he’ll be running his own team. The guy that hired him will soon be sycophantically laughing at his jokes, and every Friday down Revolution, our man will be racking up toffee shots for the sorts in the accounts team.

10) He probably gets massive discount at The Bureau
Look at that ‘barely there’ smile. That’s a guy who doesn’t have to pay retail. Ever.