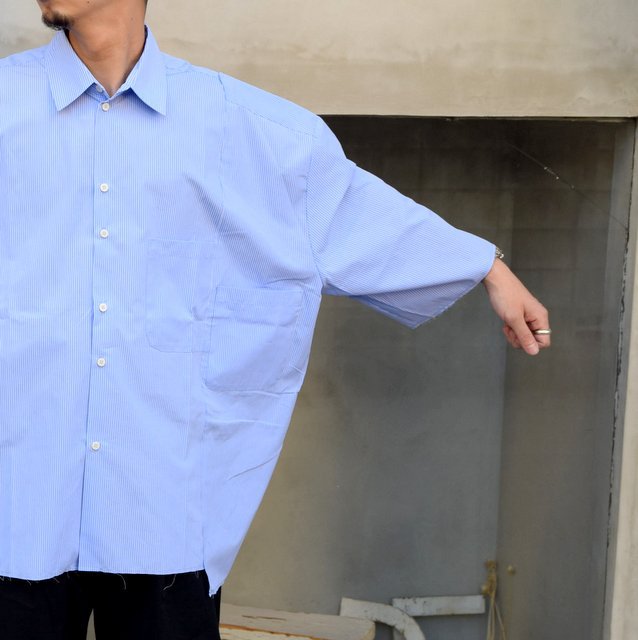 But what’s the story on top?

If you look like a windsock down below, can you, should you, be giving it maximum girth in your upper hemisphere? I say yes. Although I’m pretty sure my girl disagrees.

When I step out in giant pants and a voluminous coat I’m starting to think she’s a bit uncomfortable being seen with me. She hasn’t said anything out loud, but I can read her expression like a book. A book about things she thinks are shit, including films featuring guns, aliens or zombies, pretentious menus, the outdated slang middle-aged people use, and me in big trousers and a big coat.

The shirt here is from Camiel Fortgens, which is another brand like Beheavyer and Meanswhile that gets little to no play in the UK. It’s weird though, because Camiel Fortgens is Dutch and headquartered in Amsterdam. Obviously it’d satisfying to blame this on Brexit, but the brand was founded in 2014, it’s had seven years to penetrate the UK market, but seems much more focused on Japan.

Hailing from the Camiel Fortgens “RESEARCH” series, this piece binds together two shirts to create that billowing, oversized look. Randomly aligned hems and unexpected pocket positioning bring the conceptual, as do the challenging sleeves. Hardly full sleeves, but longer than a half sleeve  — it should be all sorts of wrong, but bizarrely ends up all sorts of right. Perfectly opposed to the low-rent ‘sun’s out guns out’ brigade, this is a piece that’ll confound and confuse as much as being, I imagine, really comfortable.

If it wasn’t quite so £333.54 I’d be all over this. I mean come on, there’s only so much EG you can wear. We’ve got to keep the menswear conversation going. Got to keep experimenting. And it if means big trousers and an even bigger shirt then so be it. I’ll just need a matching pair of enormous sunglasses so I can’t see my girl’s withering looks.