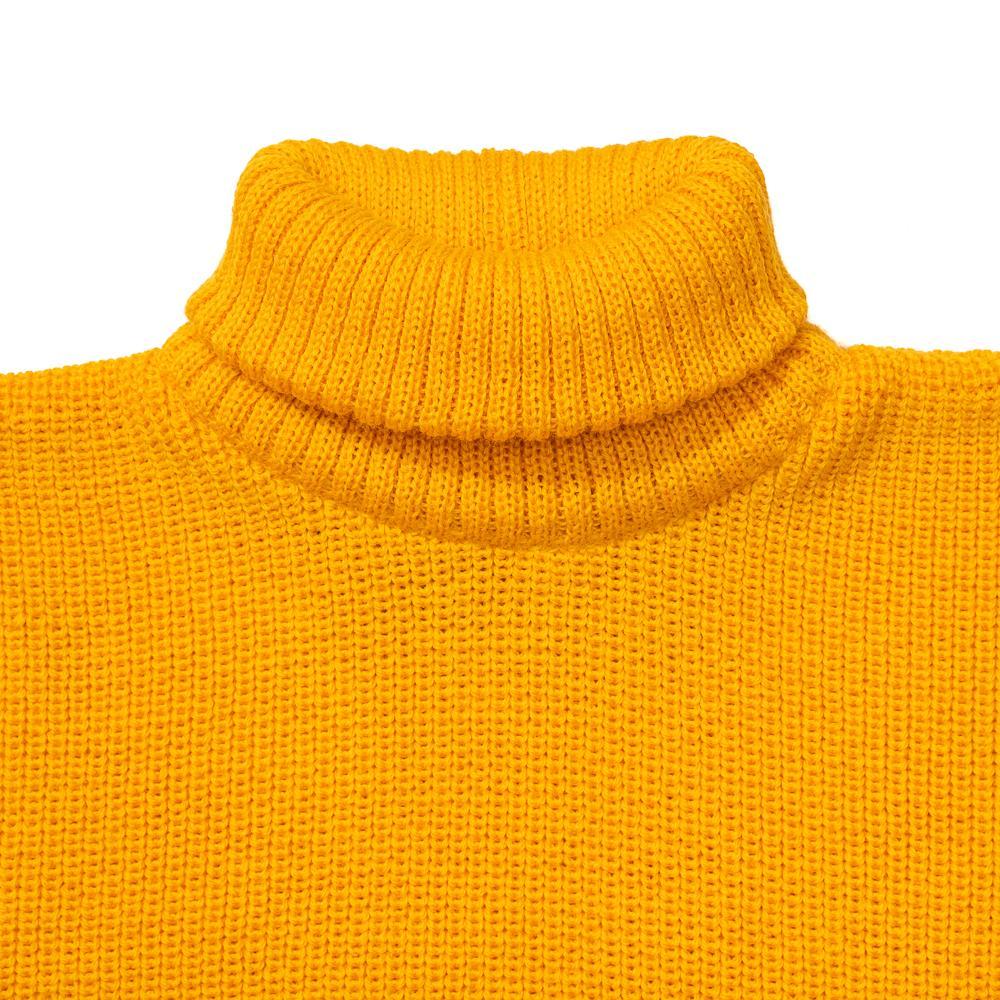 “Should fit snug with initial wears”, says retailer Clutch Cafe of this glorious golden knit. But what if you don’t want it snug? What if your very idea of hell is bright yellow fabric stretched taught across a surplus of tummy? What then?

I’ve encountered this issue with ‘nautical style’ knitwear before. I bought a tightly woven roll neck sweater from North Sea Clothing, it was a size too small, but a steal in the sale. Course when I got it home I realised that it looked fine while standing pin-straight, but as soon as I moved about I looked pregnant. I stuffed it with cushions to try and stretch it out. But as it turns out, serious fisherman’s knits are built to withstand the rigours of light upholstery. Ever since I’ve been wary of woollens with an aquatic bent.

This roll neck is from German manufacturers Heimat. And to be fair to Clutch Cafe, they do say that, “with multiple wears (it will) mould to your body”. It’s just again, being pedantic, I don’t want it to mould to my body, I want it to stand away from my body to conceal a thousand sins. Still, I’ve got my eye on the XL, just need to get the tape measure out to find out if this brand’s extra large is what I’ve got in my head (and my stomach) when I think extra large.

In case you’re in any doubt, it’s 100% virgin wool, with some lovely looking hand finishing. While the cuffs apparently feature a double roll, meaning you can modify the sleeve length without it appearing oversized.

But fit aside, the colour is crazy seductive. On balance I’d probably learn to live with a permanently sucked-in belly to bask in this radiant optimism.

Wearing this, nothing would seem so bleak. You could just mentally consign Trump and Johnson to the naughty step. I could even stop face-palming at the ignorance of the Red Wall northerners who voted the Tories in, but now find they’re getting aggressively bummed in return. What did they fucking expect? Doesn’t matter. None of it matters. Watch out idiots, you’ve still got Brexit to look forward to. Fuck it all. I’ll be safe in my jolly yellow sweater. Anaesthetised to foolishness. Lost in my usual daydream about trees that grow French Fancies.