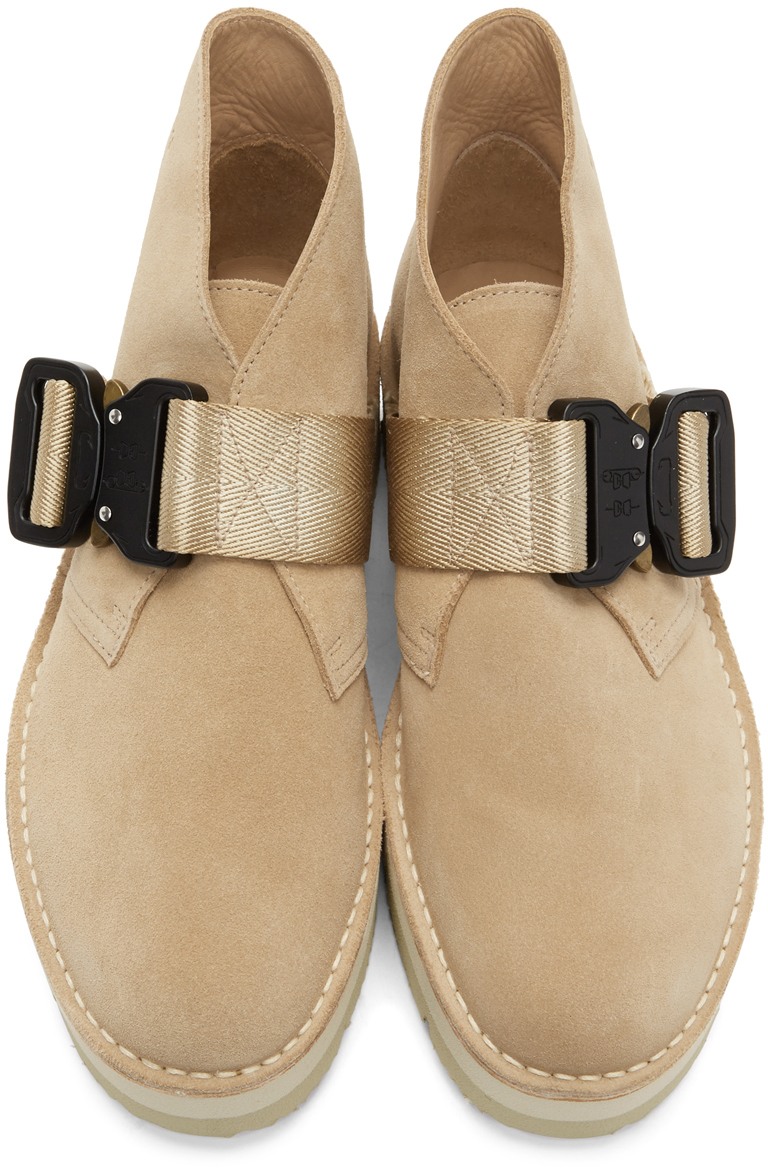 For me, Clarks Originals are the 90s. Katie Puckrik on the box, Sliding Doors in the cinemas and a nation of youths greeting each other with an affected “alright our kid”, while swaggering bow-legged, like orangutans in parkas. I find it impossible to detach Clarks Originals from all this cultural baggage.

Whether you aligned with the The Blurs or The Oasises, it was a period of pretence. Kids from the Midlands acted like they were from Manchester. While kids from Surrey zipped up their funnel-neck trackies and deleted their aitches to live their best park life. Any cultural cache the Clarks Wallabee enjoyed as the de facto footwear during the early days of acid house was demolished. Suddenly everyone and their uncle was nodding along to Supergrass in Desert Boots and Desert Treks.

It’s clear that for many, this period never went away. Your head-to-toe Oi Polloi guy still dresses for a night at Checkpoint Charlie’s or speculative queuing at the Atlantic Bar & Grill. And Clarks are always in the mix. Those signature colours, those slender gum soles, that distinctively Clarksian last. These days Clarks seem as anachronistic as Mickey Pearce in Only Fools… propping up the bar in a 90s disco wearing his 80’s grey fleck suit.

Seemingly aware of the contents of my brain, the guys at Clarks Originals are now offering these. Expansively soled and with a giant buckle; this is the Clarks Desert Boot reimagined for an audience who’ve never been (briefly) excited by a band called Campag Velocet.

It’s a Desert Boot for now, whatever now is. It’s apps, Ocado and Tiktok. It’s collapsing arctic ice shelves and totalitarian rulers. This is the Desert Boot for a time when Little Mix, a band manufactured on a TV show, now host a TV show based around manufacturing another band. Will there be another show where the winners of this show help to manufacture another band? And then another show where the winners of that show help to manufacture another band? By this point I suspect it’s crucial to the stability of our society.

On board these shoes you’ll find regulation Clarksy beige, that big press-release buckle, a thick mid-sole and a Vibram outsole. There’s no loop on the heel, giving things an appropriate, stripped down minimal feel and that’s about that. Other than the £300 price. If you look here, you’ll see a more standard (read horrible) version for £140. So the buckle and the thumping mid-sole effectively more than double the price, which is a big fucking youch.

£300 for Clarks Originals? That doesn’t feel like a party I want to be invited to. Especially as I can still hear Supergrass pumping on the stereo.