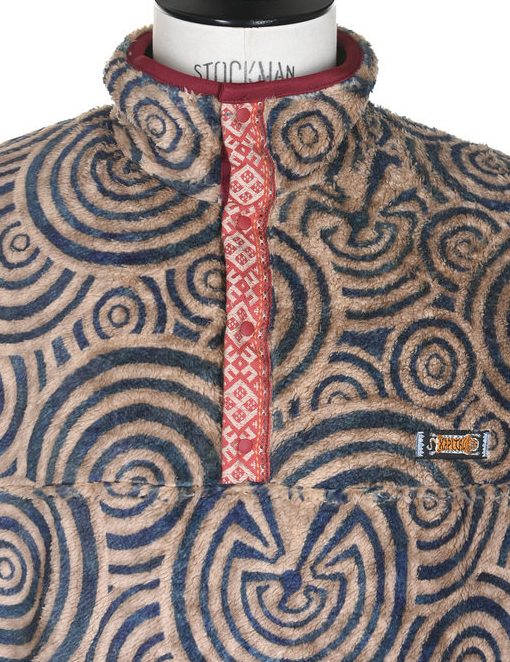 This the ‘Maze’ pullover‘ by Kapital. If you look closely, you’ll see there’s a graphic of a maze upon its torso. See the little man about to enter the maze? If you trace his route you’ll discover he’s about to enter perhaps the easiest maze ever devised. I’m not sure it even qualifies as a maze, really it’s just a spiralling path. I’m not sure the little man could get lost if he tried. You might also notice that there aren’t actually that many mazes on it. Most of the graphics look more like targets.

To title a pullover ‘Maze’, then fail to deliver on either quality or quality of mazes feels like an oversight to me. This is England goddammit. We’re used to well considered, luxury products like Brexit and Test and Trace. Come on Japan, pull your finger out.

None of which suggests how hot I am for this. I’m positively broiling. I’d like to wear this under an oversized blazer, with a wide-brimmed hat and chunky Max Pitton spectacles. It’s a look so fierce it’d bring some real jeopardy to my Zoom calls — participants would be warned not to look directly at the screen.

The ‘Maze’ pullover’ is made of polyester fleece. Onboard you’ll find a sticky-uppy collar, a contrast button stand, snap buttons, elastic at the cuffs and hem and a little Kaptial badge with a tiger on it. Which is a lot of stuff happening at once, so only experienced clothesman need apply. Besides, under post-EU rules you’ll need a licence to wear anything this subversive.

Naturally this level of intimidation costs. Entry is 265 quid. And at the risk of sounding like Little Lord Snooty, I actually have 265 quid. I have it right here in front of me, in a large tin crucible full of coppers. I just fear I might need them soon to pay for air. If I could, I would absolutely buy this. It looks warm and comforting, as well as being entirely demented. Retailer Kafka suggest it looks “vintage bohemian.” But it reminds me of mid-90s Wu Tang. Something U-God might have worn in a group shot hoping to be noticed.

On the group’s unfairly overlooked 2017 album The Saga Continues, Mr Meth suggests, “…it’s not about the image, it’s the thirst.” I tend to think it’s about both. But I am all sorts of thirsty for this.