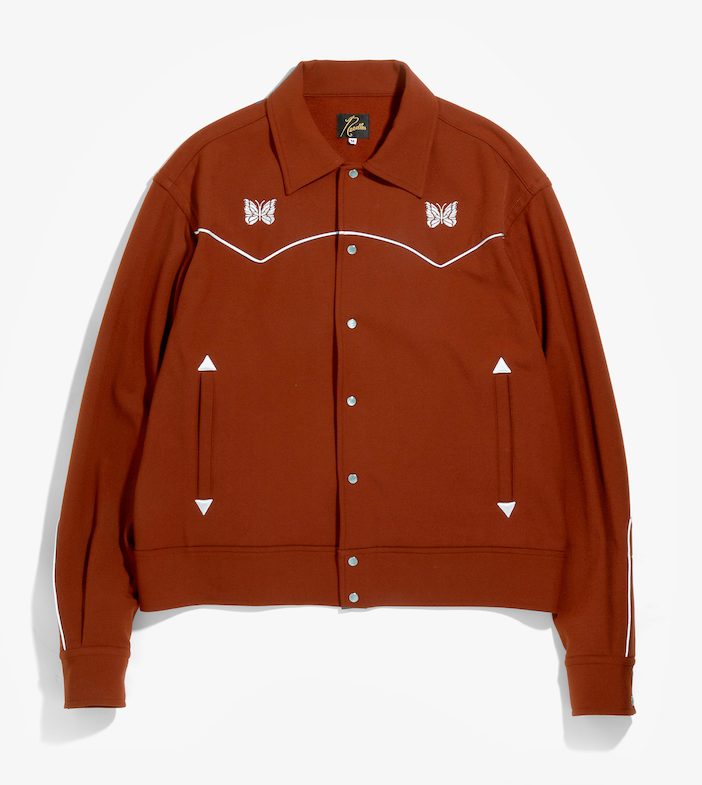 How does the wild west look fit into UK life? Awkwardly, I suggest. Sidesaddle, at best. It’s difficult to separate the look from its intrinsic theatricality. Over here it’s the preserve of line dancers and the lonely middle-aged bloke in the corner of the pub wearing cowboy boots. Not exactly what you’d consider cool.

I was banging on about this kind of thing just the other day and now Needles have hopped into the stirrups.

The Funset of Art piece we examined basically added buckaroo detail to a workwear standard. This jacket goes full gaucho.

It’s available in black, green and red over at Nepenthes Japan and I hate to trot out the old Village People cliche, but this is perfect for the ranch hand stereotype. Yet, is there something more here? What is Needles designer Keizo Shimizu trying to do?

Ultimately, this is a piece for the Needles heads. You’ve got to really buy into the brand vision, the manifesto… even if it’s a little unclear what it actually is. Needles devotees may not need much convincing. But it can be interesting to step back and try and look at it objectively:

Full transparency: I’d describe myself as a fan of the brand Needles. I’ve bought and worn the tracksuit trousers — as much as the mainstream hip-hop co-signs don’t sit well with me. I’ve bought and worn the HD Pants — even though for a man of my years they’re arguably inappropriate. But this dressing up like a camp cowboy? I dunno. Stetsons off to anyone brave enough, but I think I’ve got to sit this rodeo out.