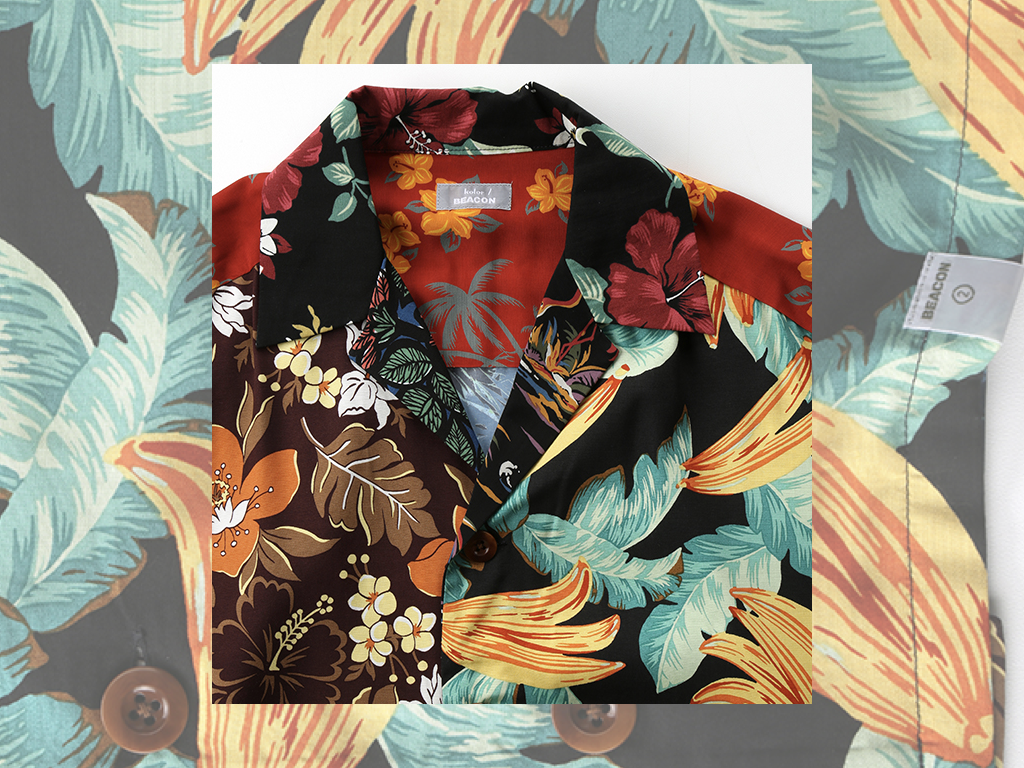 The Hawaiian shirt is a battleground between beauty and ugly where ugly always wins. In the UK, a sunny day brings out the ‘Hawaiian shirt ironists’. Frequently young and thin, they have short hair, moustaches, some kind of Japanese sandals or (ironic) Crocs and a tote featuring the logo of an independent garden centre. The screen on their iPhone will be shattered; the back will be covered in stickers. They use the word ‘like’ too much. They begin an answer to any question by saying, “I wanna say…” They’ll smoke other people’s rollies, but always have money to buy a pickled vegetable wrap. They’ll be wearing a hideous Hawaiian shirt.

An ironic appreciation of these hideous Hawaiian shirts from Japanese maker Kolor suggests they’re not hideous at all. Or are they? The thing is Hawaiian shirts only really appear during the summer months; a period when Johnny Englishman traditionally gets his doughy legs out, pulls on a threadbare Superdry tee and cracks the first of many cans. Consequently we frequently view the ‘Hawaiian’ through the same lens. Dipshit-wear, beloved of ‘wacky’ American salesmen and attention seeking British lager-bros. Even within one’s own mind, it’s difficult to know whether you genuinely like shirts like these, or you think you like them because irony tells you you should.

Enough of such blather. What we have here are two Hawaiian shirts, different patterns, same principle: clashing florals and bananas and palm trees. This is what Crocket and Tubb’s informers used to wear. This is Tony Montana bum-fucking Timmy Mallet. They’re every DIY SOS balls-up ever, on a shirt.

Because they’re from Kolor, I’ll say I like them. But as I say, in cases such as this, I don’t even know my own mind. Do I like them, or am I supposed to like them? I wouldn’t wear them, but do I like them anyway? I dunno, what do you think? They’re insanely expensive, so either way, you better be damn sure.