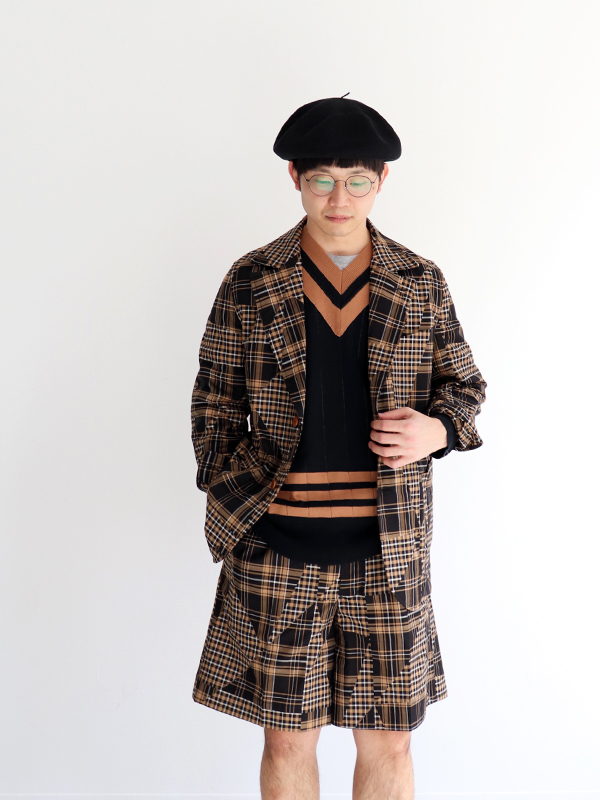 At first glance this looks like something you’d see squashed amongst other vintage treasures on a rail in Camden Market. So defiantly is it drawing from the past, with its oversized collar and key-party colour scheme, it’s difficult to imagine it originating beyond the 70s. But look closer. It’s made of cotton for one, there are no synthetics ready to combust near a misplaced fondue. But more crucially look at that jagged, irregular patchworking. It’s a technical feat that brings things right up to date. Kind of ugly, but also massively beautiful. This piece is by Japanese makers Haversack. For many wardrobes it’d be a game changer.

Over on retailer Strato, it’s labeled as a ‘shirt jacket’; the cuffs kind of give things away. But to my eyes, it’s 90% jacket. Unlined, yes. And certainly super light-weight. But, come on, it’s a jacket. The kind of thing worn by Jack Regan in The Sweeney and numerous scraggly-haired extras in Minder’s Winchester Club.

As a trend, Japanese Boro patchwork, in hues of indigo, navy and royal, feels oversubscribed right now. Not that ‘trends’ carry much weight on this site. But it’s difficult to argue that seeing a similar chopped up approach in tan, pale orange and chocolate doesn’t feel fresh in comparison.

I’ll be honest, I genuinely love this. To me it belongs in an ITV 1970s sitcom. You know the sort of thing; a snaggletoothed family scream insults at each other through mouthfuls of tea and toast, while the aspirant gigolo of the house rolls his eyes and says, “oh gawd”, prompting hysterics from the audience. The gigolo would be wearing this. Sadly, I won’t be. Being blunt, I can’t afford it right now and anyway, I don’t have the Robin Asquith mane to properly pull this off. Not sure there’s much demand for ‘Confessions of a Content Marketer’.