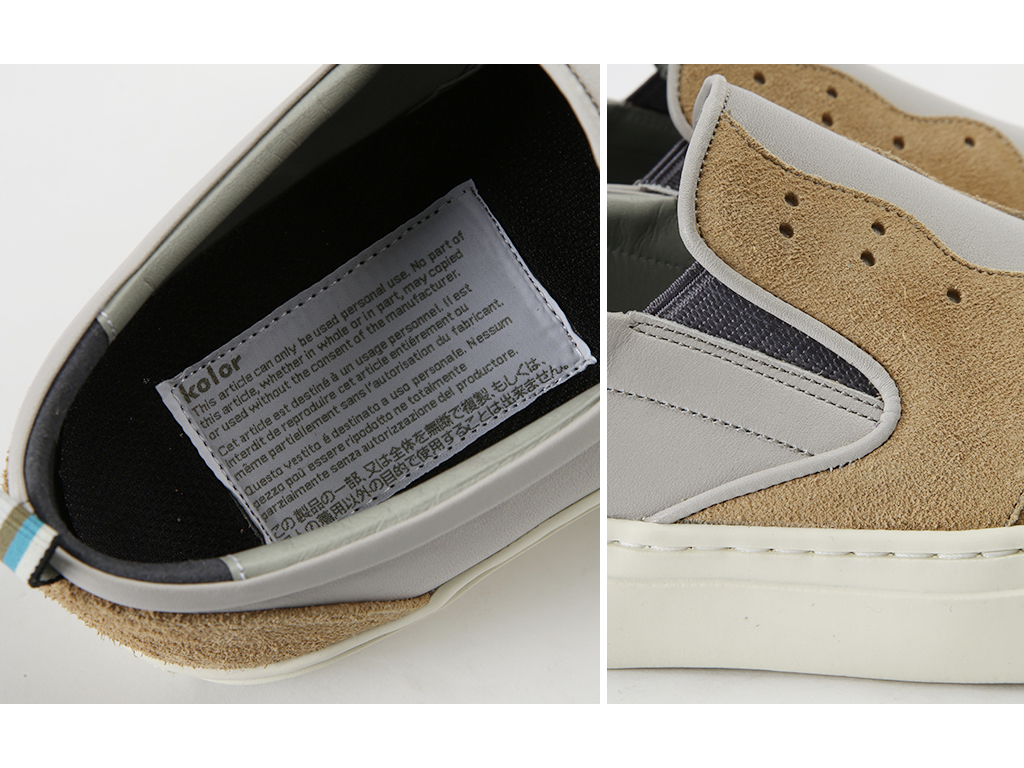 Broadly, in sneaker terms, you’ve got: sportwear giant offerings (straight up Adidas, Nike etc…) you’ve got your sportswear giant x designer brand colabs (Adidas Y3, Reebok x Opening Ceremony, Adidas x Raf Simons etc…) and you’ve got pure offerings from the designer brand themselves. These undiluted designer visions frequently result in the diabolical. Overwrought and hosed with pizzazz, you only have to take a look at the relentless paint flicking over at Maison Margiela, the eurotrash branding at Givenchy and anything Giuseppe Zanotti has ever done to get the idea. This shit has Love Island contestant written all over it.

Here’s a style from Japanese enigmas Kolor that manages to break the mould.

Soft and subtle, these slip-ons aren’t trying to get the party started, they’re happy to stand in the shadows, sneering as everyone else clowns around. Yes, they’ve got a bit of that vaguely annoying they-look-like-should-have-laces-but-they-haven’t thing going on, but that can be overlooked in favour of the gentle, but modern tones, the quality fabrication and, frankly, the fact that they’re mega obscure; no one you’ve ever met will own these.

They are over at the continually mightly Sculp Store in Korea, and they’re down to the last ones in all sizes so, if you’re interested, get a swerve on. Personally, I much prefer these to the Adidas x Kolor stuff I’ve seen. So in this instance I’d say the pure designer vision is preferable. Someone tell Giuseppe Zanotti that not everything is improved with velcro and studs.

PS: Big thanks to Redditers antithetic_koala and thecanadiancook for the shout out over on their style blogs thread.