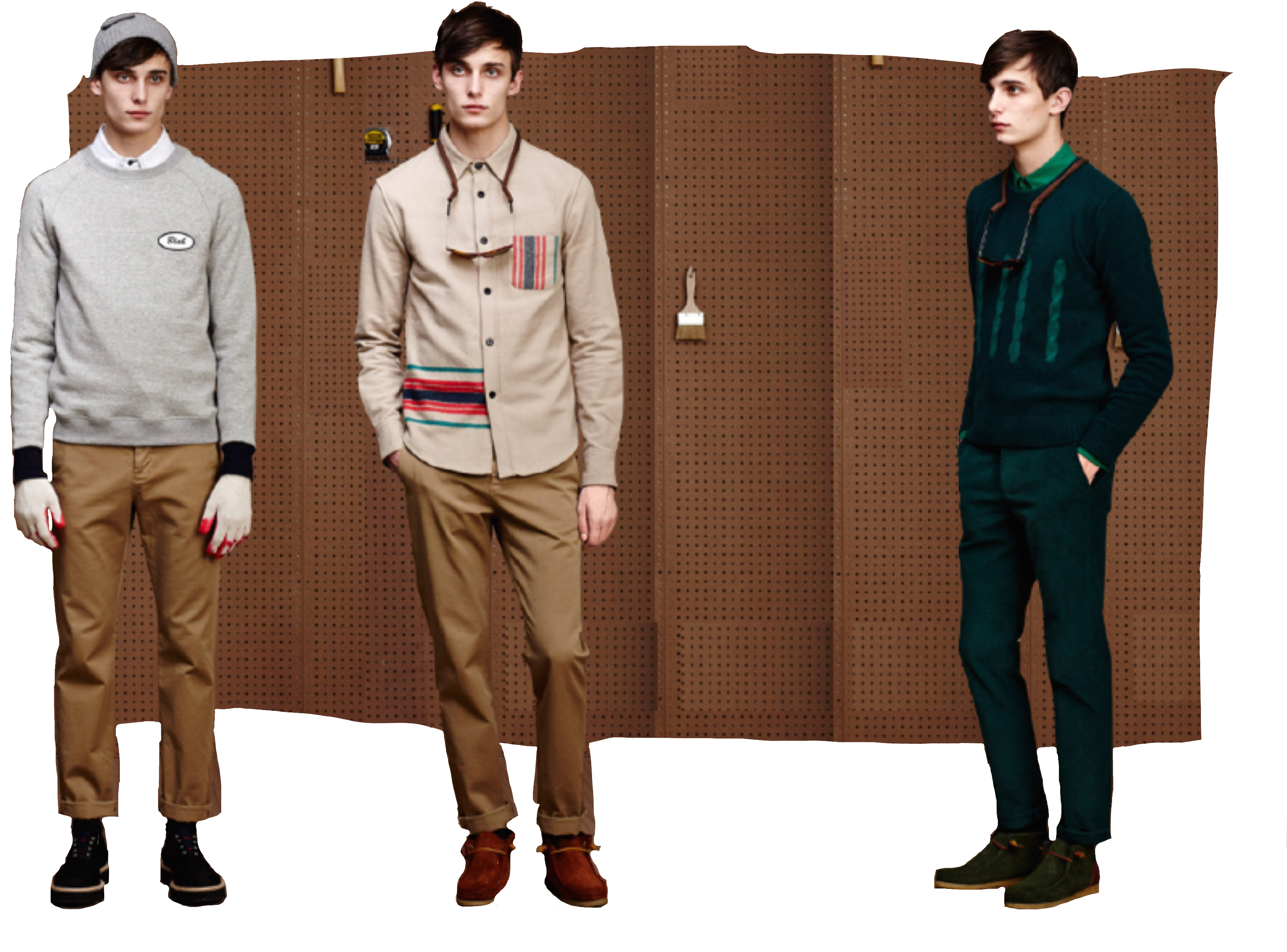 That’s a Grazia-style headline right there. So consequently, it’s not true. I just thought I’d go down gormless fash-mag route and whack a bombastic statement of faux-significance up there. The truth is, I needed something to write about, quite liked the look of a few things in the Band Of Outsiders AW15 lookbook, pinched some pics, scribbled numbers on them, uploaded them and here I am. I have literally no idea what I’m going to say about them. Fuck me, this is exciting.

Okay, okay, it’s grey suit. But think about it. Do you actually own a light grey suit like this? Pale suiting is a killer move for the kind of ‘tude that suggests you make your living with crayons and your mind. Also, keep your eyes on that ‘shirt round waist’ thing. It is a thing. Personally, I remember last doing that particular thing with my school jumper. But check the streetstyle shots around the recent menswear shows. They are packed with bros busting a ‘shirtbelt’, acting like it wasn’t a ludicrous stylistic affectation, but just a convenient way to transport an extra shirt. Jesus…

That is a beautiful coat. I mean, look at that wooly detail and that exposed zip. And come to think of it, that chest pocket, placed a bit lower than normal. With a flap on it. I would, according to every scientific measure of what is actual and real, wear this.

Peep the jeans breh. No idea what’s going on here, other than a weird scattershot of rivets where rivets don’t normally be. These will either herald a new era in preposterously riveted jeans, or just look like the rhinestone shit Russian barmaids wear. Too early to say.

So kind of like a Junya coat, but not as patch-worked up. I’m on heat for the forest green and tan trim, but again, that zip placement is the total shit. Like totally, some shit. But you know, shit that’s good.

I can’t make out what’s going on here. It looks like a casual jacket, matching trousers and a matching blazer tied around his waist. It’s a textbook example of a stylist exhibiting wry contempt for how people actually dress. Nobody would leave the house like this. Except perhaps a theatrically pinstriped detective who specialises in local fabric themed crimes. I’m guessing there aren’t enough of them to fill a BBC six-parter.

Assholes to the ridiculous sweatpants. But the military knit is nuclear. Also on point, the grey wool desert boots. I’m all about that nonsense lacing too. It’s that preppy, deckshoe ‘Heaving Line Knot’ approach. Fans of the very mighty Ian’s Shoelace Site, will be more than familiar.

The full denim bodysuit. I like the idea of this polished and coiffured adonis, turning up for work on a real life building site dressed in this. I wonder how long it would take for him to be hit on the head with an egg sandwich and for someone to piss in his flask.