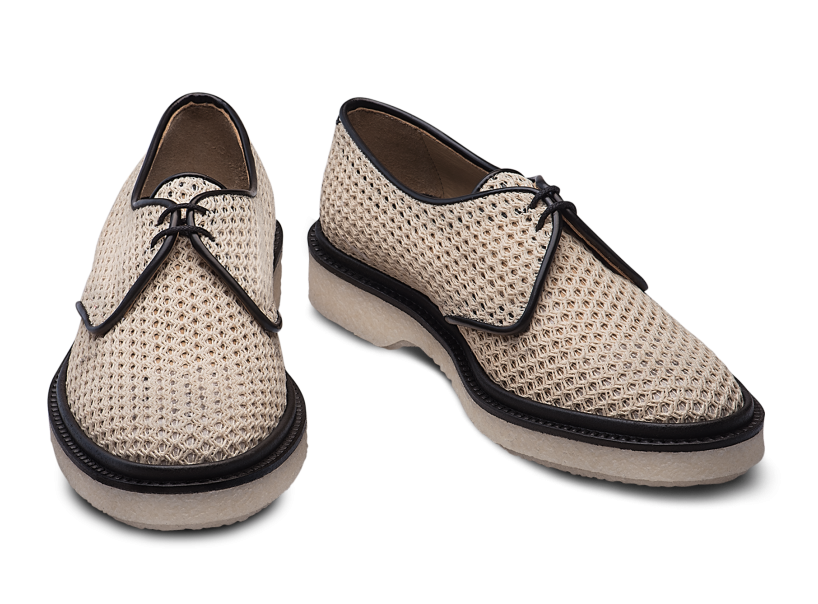 “Just because there’s a wedding, you don’t have to buy new stuff”, my girl says. Logically, I know she has a point. But as soon as we receive an invite to someone’s nuptials, my thoughts, during the following weeks and months, are regularly hijacked by concerns about what I’m going to wear. I keep a rarely worn, 98% prisine, pair of navy Engineered Garments trousers on stand-by for just such occasions. But even with those as a foundation, it still leaves questions around what blazer, tie, shoes, shirt…?

Just to be clear, I am more than aware what a preening, narcissistic bell-piece I sound like. If this comes as a surprise, I can only assume it’s your first time here.

I’m considering these as my wedding guest shoes. They’re from Adieu; Parisian purveyors of edgy luxury footwear. At 50% off and coming in at just under €200, they’re achievable, even if they appear to be woven from straw. The uppers are actually just made from something called, “net fabric” and with the black trim they’re possibly a bit ‘jazz hands’, but I’m hoping they’ll punctuate a broadly navy look quite well. I’ve got some misgivings around these shoes being a bit ‘fashiony’, but it’s a late summer wedding and the rest of my fit will be unstructured tailoring; I’m reasonably confident I can land this flex.

I dunno why bother so much. Before attending a wedding I always imagine the guests will look like they’ve just come off a Comme catwalk. They never do. You’ve got three standard male wedding attendees. Guy number one is in his work suit – he’s the first to ‘lose the tie’, order the shots and fall on his arse on the dance-floor. Guy number two is the wannabe dandy; almost certainly dressed by his wife and under the misconception that having a floral-lined jacket, Paul Smith cufflinks and pointy brogues with lime green trim marks him out as a player. And finally there’s the nuclear-hipster. This guy is from the provinces, but dresses in a way he thinks guys in Shoreditch do. Tattoos, big silver rings, rolled-up calf-strangling trousers, shirt open to his nipples and Dumbledore-level beardery: he’ll also often wear an enormous Peaky Blinders style cap, which makes him look like he should be selling pastry-based goods out of a cart on Bath high street. Did I mention I’m a bell-piece?