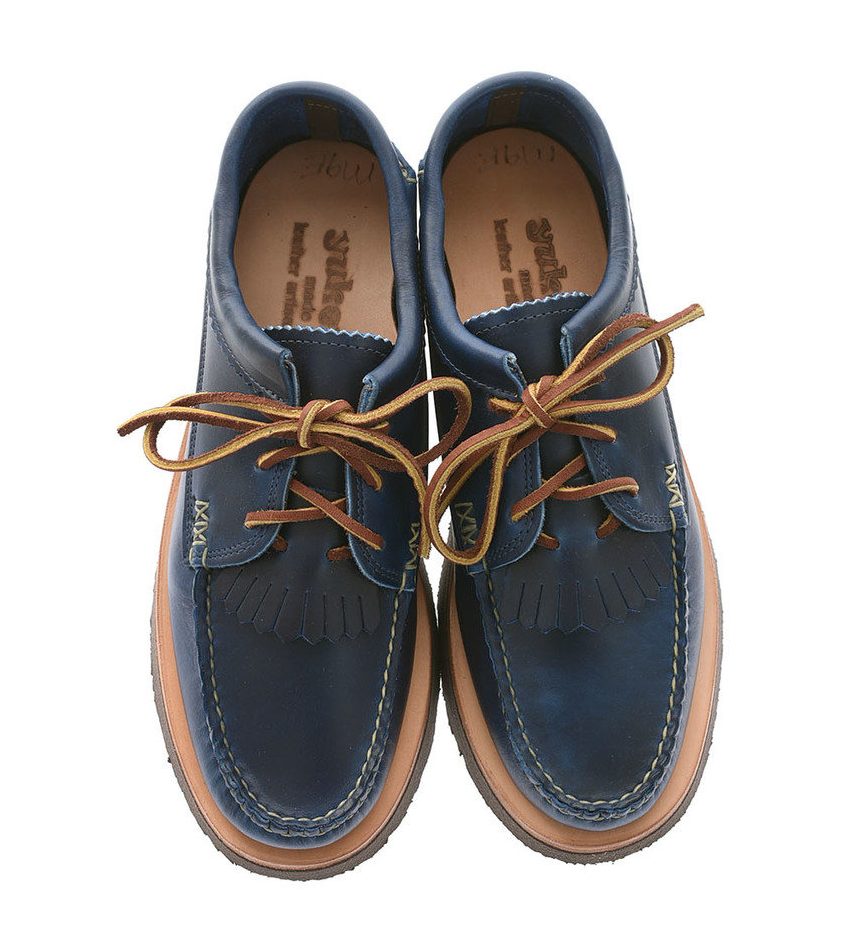 I’ve just had a pair of these resoled. Not these exact ones, mine are tan, I’ve had them for years. I took them to Hoxton Shoe Repairs and they did an excellent job. It doesn’t stop me wanting this pair as well though.

Yuketen Blucher Rockers (with the kiltie) have been my favourite shoe style for a few years now. I’ve got two pairs, the tan and a pair in green suede. But two is not nearly enough. I think five pairs would be a respectable amount. But I don’t appear to have a spare £485 to buy these. A fact that leads me to believe I probably don’t have £1455 to buy three pairs. Mathematics can be a real kick in the tits.

This pair isn’t just blue, it’s ‘Cardinal Ink’. I’d love a pair in dark navy, but nevertheless, this is a strong shade. If you’re familiar with Yuketen and the Blucher Rockers in particular, you’ll know they’re hand-stitched, using seven asymmetrical pieces of leather drawn from a three-dimensional pattern. So when you lace them up, they contour effectively to the shape of the foot.

They’re also built from Horween Chromexcel leather, which is an especially supple form ideal for this kind of comfortable urban moccasin. I say ‘urban moccasin’, because that’s what Yuketen themselves call it. I love that. Urban. Moccasin. Ideal for the more nonchalant man about town.

Aside from the enviable details — leather insole, Goodyear welting, brass eyelets — it’s simply the look of these things that does it for me. The ‘Rocker’ outsole (manufactured from EVA foam) is vast. It’s like walking on blancmange. Only harder. Less sloppy. And not that much like blancmange at all.

If you haven’t experienced the Yuketen Blucher Rocker they have my highest recommendation. Obviously they work with denim. But I think they really come into their own when worn with a suit or trouser/blazer combo. The whole ‘sneakers with a suit’ thing reeks of ad agency awards ceremony. But a pair of shoes like these — shoes that are about as casual as a shoe can get —  when these are teamed with your formals it’s next level entirely. You’re Serge Gainsbourg. You’re a young Peter Fonda. At the very least you’re a man in some very expensive very casual shoes. And maybe that’s enough.