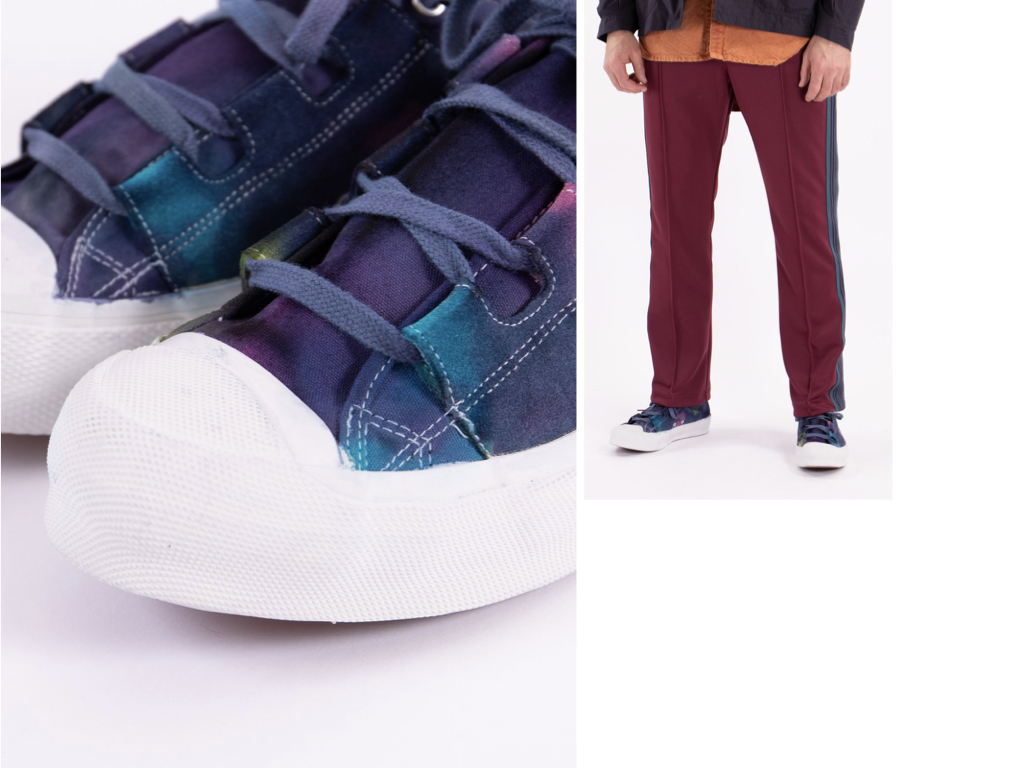 If it’s not The Bureau it’s Alpha Shadows. If it’s not Haven it’s Present. Over the last week or so there’ve been frantic, sizeable drops from big-hitters Kapital, Needles, Monitaly and more. Just when you think you’ve got your wearable ordnance on lock, here comes a load of new stuff to make your old stuff feel less weapon. And naturally this leads to a perpetual reexamining of your finances, internal vows to save more next month, and long periods of stubborn silence when you explain to your partner that the purchase of an asymmetrical Kaptial tabard now, will lead to an enhanced commitment to saving for a city break later.

Now watch as a sneaker shaped spanner is thrown into your most exacting fiscal stratagem. These Needles dye-dyed bangers are insane. Nightmares in a damaged brain. Video nasties for your feet. “Purple” and “yellow” are how they’re described over at The Bureau. But there’s cyan in there, pink and various other shades of what-the-fuck. They’re beautifully heckers. Basquiat off his box on Ya Ba.

Obviously £320 for a pair of canvas sneakers, that look like you’ve done a couple of shifts at a Dulux MixLab, is a big ask. But this is Needles. And aside from the chromatic baboonery, you get their ghillie lacing system. Plus a fat sole. Plus different shaped toe caps on each shoe.

In fairness, I’ve got Needles sneakers and they are really robust. The canvas is thick, the build rigid and because of the colour (mine are over-dyed purple, an effect that renders the sole a smudgy blue) seemingly resistant to casual dirt. I don’t think I’ve ever actively felt the need to clean mine; they still look fresh.