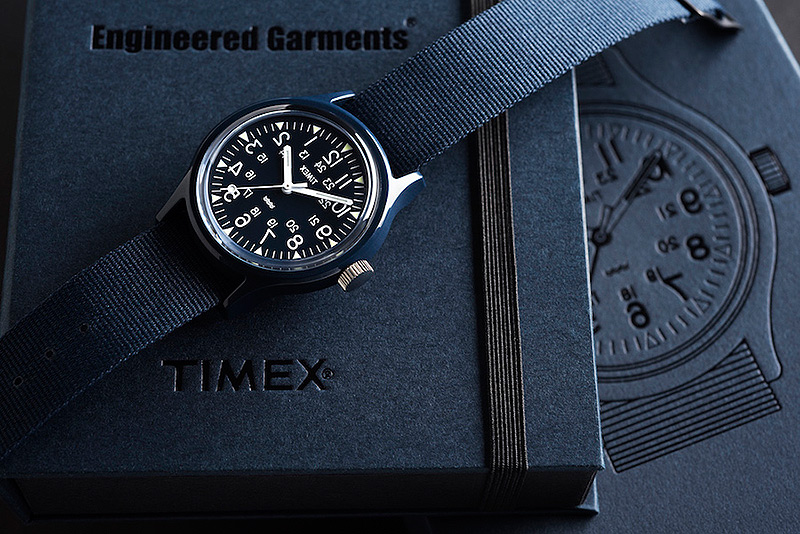 Unless you’re prone to serious horologistic urges, then like me you probably own, tops, three watches. Or maybe four. Or maybe one. I don’t know, if I’m honest, I don’t care. I don’t scribble much about watches, but look here, this is definitely a watch. It’s a Timex watch, which is thuddingly unremarkable, but it’s also an Engineered Garments watch, which is not. EG boffin-at-large Daiki Suzuki has created this timepiece to celebrate 40 years of Japanese garm store Beams. And see, the numbers are all back to front. There’s a reason for that. And it’s a reason that is mildly interesting.

Apparently clocks on the walls in barber’s shops used to be back to front. So the snipper, and presumably the snipee, could read the time correctly in the mirror. Why this contrary approach to digiting has made its way onto this wristwatch is unclear? A Google Translating of this here article by Suzuki himself reveals references to the aforementioned barbers mirror, the punk ethos of disruption and inversion and the big clock outside Vivienne Westwood’s shop Worlds End. I’m still none the wiser. Having said that, it’s EG, it’s a watch and as a consequence, highly desirable.

And therein lies the problem. How to actually get one of these? Unless the guys over at The Bureau have got them ordered, it could be tricky. The olive one dropped yesterday, while the blue one hits at the end of April – that much I can fathom. But where can they be bought? I can only presume Nepenthes bricks and mortar stores only. Which, as someone who is neither in New York or Japan, leaves me rather ticked off.