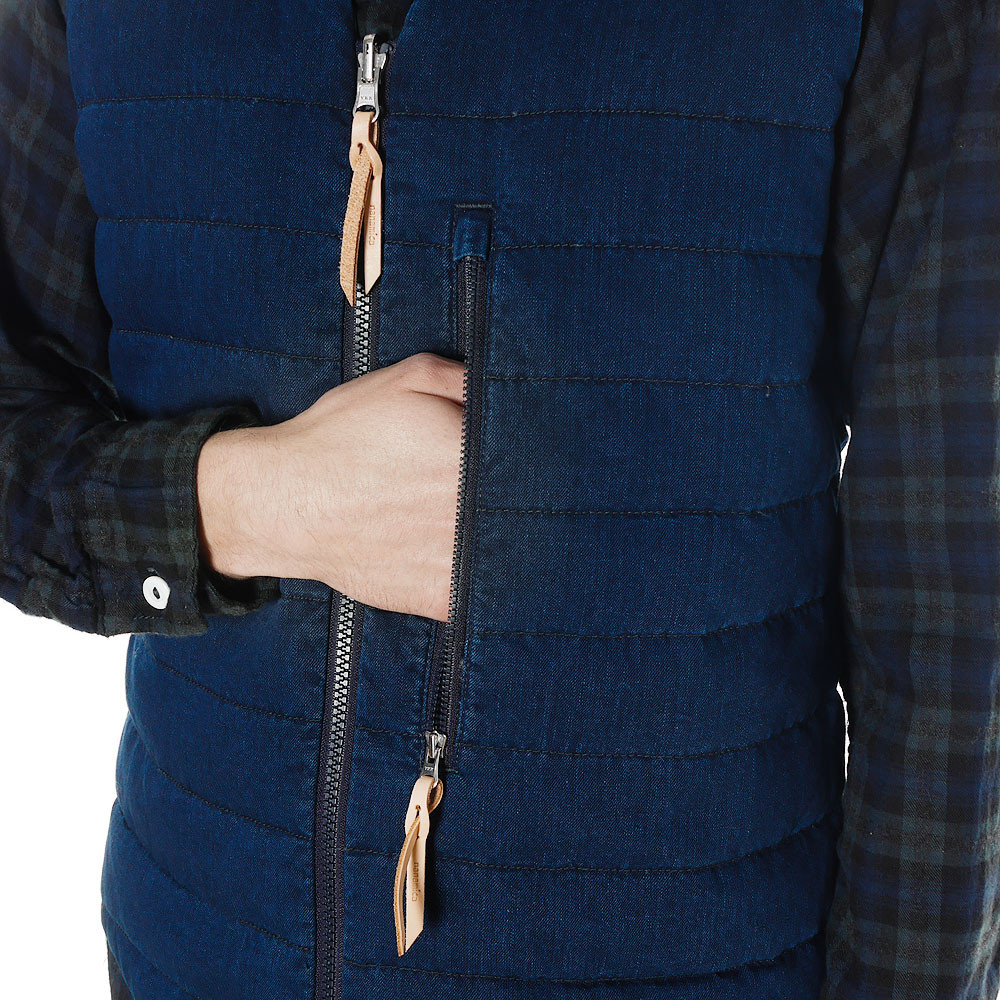 So, Mr Frosty is swinging his big dick. It’s all styles of shivers out there right now. Time to get your layering game correct. Personally, I’m gonna hold off on the chunky knits until it gets fully perilous, preferring to multi-up on jacketing. I’m all about the gillet too. But a lighter vest alternative is also a killer move for slipping over a wool shirt and under your outers. Here’s five of the best lighter-weight, vesty/waistcoaty things blowing up right now.

This Nanamica Cycling Vest bangs hard on the velodrome tip. It’s slim, but filled with ‘KODENSHI® down with rayon’ which sounds both techy and warm. Basically, I’m just a sucker for the dangly leather trim. If you’re all about the bicycling, just drop the required 209 quid and you’ll look like a top-end spokesperson.

Here’s another in a similar style from French brand Arpenteur over at Oi Polloi. Simple styling, with a horizontal quilt thing going on. Nice big pockets on this one, so if you don’t want to sabotage the line of your outerwear, cram them up with your sundries. This is on for 195.

It’s all-out Action Man at Sophnet. There’s a majesty of pocketing on this cotton/nylon beast, as well there should be, it’s based on the aviation survival vests used by the US Military. It’s got a camo liner too, just to press home that urban combat vibing. This shit looks so strong other bros won’t know whether to fight you or fuck you. 217 quid will buy you that dubious pleasure.

Warm but lightweight, that’s the theme today and this Norse Projects Ivan Utility Vest is exactly on point. Dunno how you feel about the Norse branding badge, is it becoming a bit ubiquitous? I’m on the fence. But ignoring that, this is a solid piece for 145 notes. It’s got a smart knitted collar and the pockets are zipped – so there’s no danger of that optimistic packet of sheaths falling out during the Viennetta.

Finally the struggle option. Or is it? I’m I’m honest, I think Universal Works are dropping off. Their knitwear is mad generic (that Lyle & Scott colab is rankness) and it just seems like, this season, the brand is treading-water design-wise. Even so, there are some bits and pieces that I’d cop for. Just 115 credits and you’ll get a solid, quilted design, side pockets and chunky buttons.

So there you is. Five sort of gillets, but lighter – perfect for stacking into your layering play. What about that? That’s a proper article, with real reader benefit right there.

Next up, a festive sweater only available from the Huambisa, head-shrinking tribespeople of Peru.