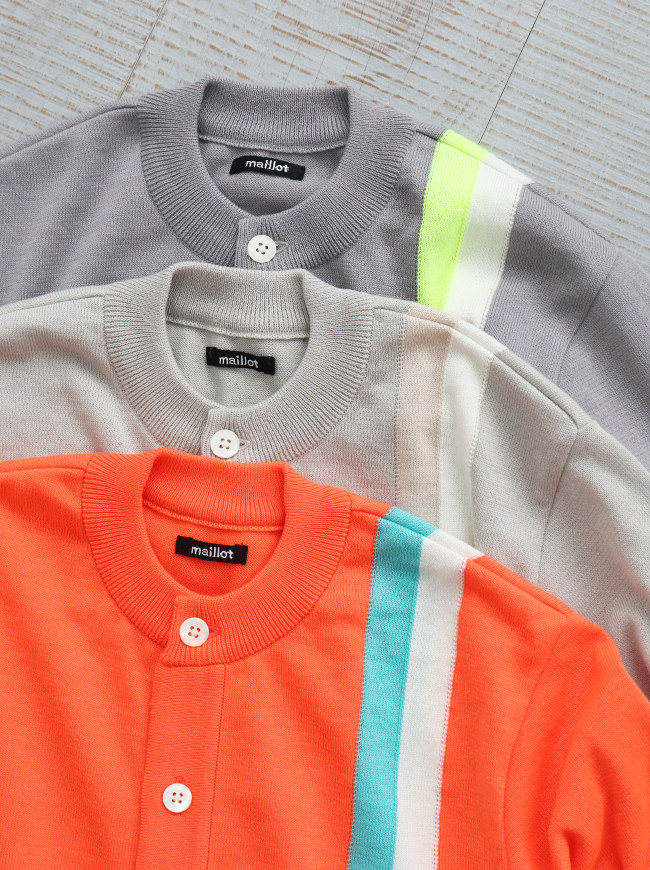 Back once again with the round-neck cardie. It’s that twin-set top-half style that’s going nowhere fast. Still rocking a V? You need to take a long hard look at yourself my man.

Here we’ve got an offering from Maillot, Makoto Fukuda’s made-in-Japan imprint specialising in enhanced basics. It’s actually from a new line called Maillot Mature, which boasts, “higher quality fabrics and more careful sewing technology.” According to retailer Strato the line is, “for mature adults who know things”, which is possibly the loosest positioning statement ever. That said, having given it some thought, I’ve concluded I’m both a grown up and I’m fairly certain I know a few things, so I guess I’m the target market.

When it comes to this cardie, it probably helps to be at the more mature end of the spectrum. The three colourways are unashamedly retro, pastels clash with neons and that single ‘go faster stripe’ is straight out of Fosters circa 1983. This is knitwear for the man who’s still got a Terrahawks annual on his shelf.

My choice would be the palest one (‘Sand x Grege’). Colour and pattern-wise it’s straight-up Mrs McClusky in Grange Hill. But that round-neck, top-to-bottom fastening brings it bang up to date. Perfect for a breezy afternoon on the beach. Accessorise with a Hitachi 3D Super Woofer and a King Cone.