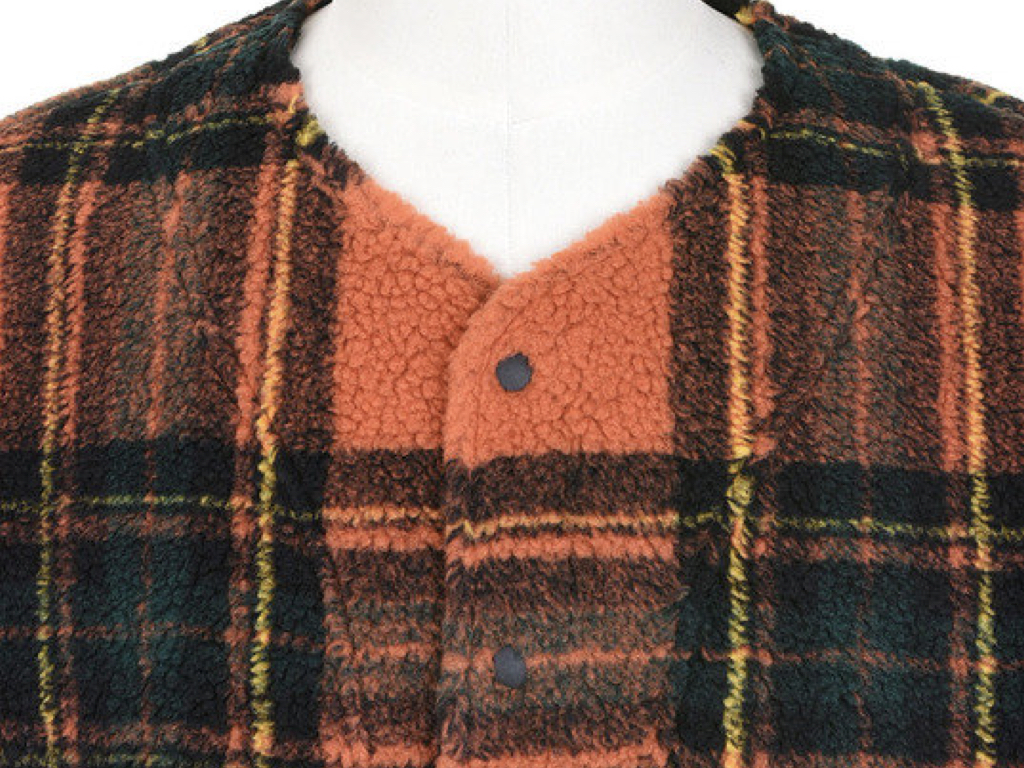 Proper cabin in the woods stuff this. Fuzzy, warm and practical, with a strong retro flavour. There’s something of the ‘video nasty’ about it. This is the gear worn by the local ‘crazy’ warning the kids to stay out the woods. Or perhaps the camp councillor, just before he’s beheaded with a pair of shears.

I doubt such a fate would befall me around Peckham. The only daggers I’d get would be the green eyes of envy from the local style-bros. To which I obviously say, bring it on.

We were in South2 West8 territory just yesterday, and yes, here we are again. No apologies: it’s the most pokey stuff I’ve seen for weeks. Gloomy sensibleness hangs from most racks, but this brand is bringing the sensational. Florid patterns, irradiated colours; pieces that make you question not just what’s rational, but what’s possible. No, trousers don’t have to be drab olive. And no a tartan fleece doesn’t have to be forest green and murky red. Tartan can be Tango orange and be better for it.

Those snap buttons  — sized just so — keep things modern. There are a couple of patch pockets and that’s your lot. Without wishing to speak the bleeding obvious, it is what it is. An eye-gougingly bright checked fleece that’d work as an outer, or to provide a savage pop of colour beneath an overcoat. You can grab it now over at Kafka.

I’d like to wear this to celebrate America’s triumph over hate and idiocy. That here in the UK, we’re still mired in dimbo exclusionism is no matter. Our Stateside brethren have shown us the light and amusingly fucked Brexiteer’s hopes of an easy trade deal. I want to pull this on and march up and down Rye Lane with a smile on my face, while day-dreaming that I’m the star of a 70s made-for-TV horror film about Yetis.