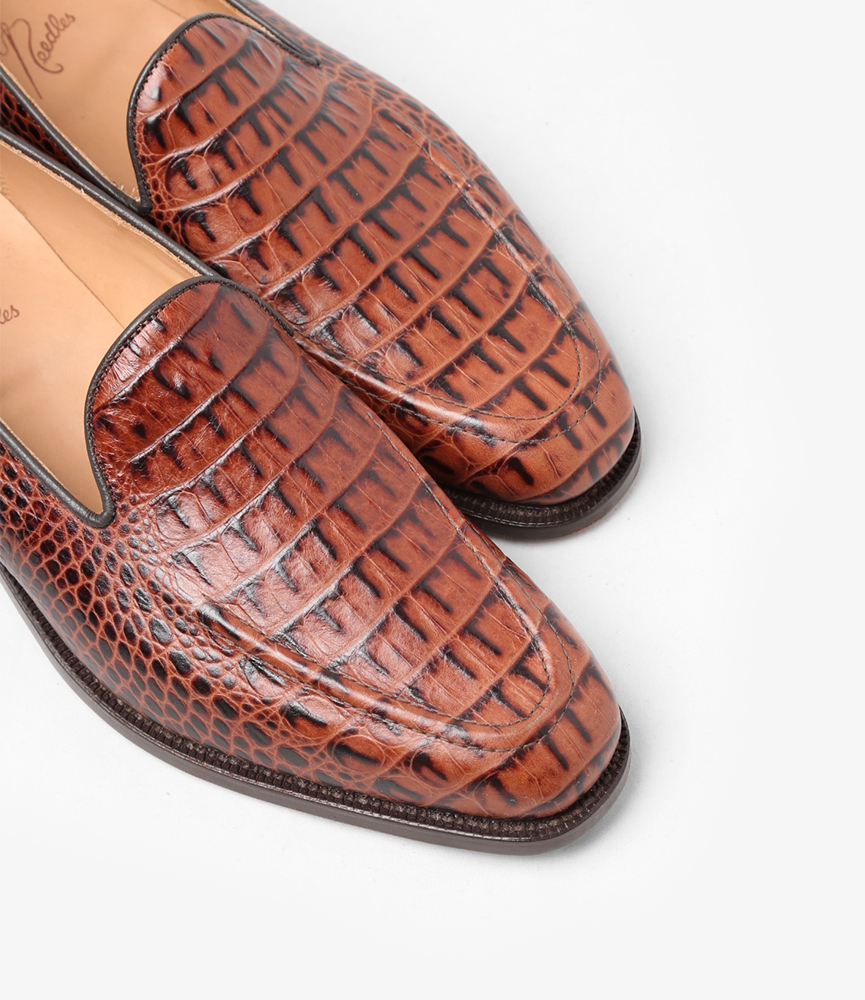 Needles loafers either make sense to you or they don’t. Look at them, they’re all pointy and slim; they’ve got the smell of second hand car salesman. I dunno about you but I don’t hold the bejewelled guvnors in Rise of the Footsoldier up as arbiters of style. So why would anyone want to wear these?

As I say, they either make sense or they don’t. If you’re a fan of Nepenthes look-books they’ll make sense. To the more casual viewer they’ll sit somewhere between New Bond Street glitz and a snaggletoothed, flat-roof-pub-dandy.

Nepenthes, and Needles in particular, frequently trade off the awkward results of sartorial culture clash. Cowboy hats with business suits. Ascot collar bows in place of ties. And, perhaps most notably, tracksuit trousers worn with slip-on shoes. This latter combination has become something of a Needles signature. It’s almost as though designer Keizo Shimizu was trying to consider wrongest possible shoes to wear with track-pants. It’s Japanese visionary meets Vic and Bob.

Still, if you buy into Shimizu’s philosophy, the idea of teaming these mock croc loafers with a kaleidoscopic pair of Needles track-pants is not just reasonable, it’s standard practice. But I’ll be honest, outside of the odd Instagram feed and the Nepenthes staff, I’m not sure who actually wears this combination. Move in the right circles and guys done up in EG are easy to spot, even South2 West8 crops up occasionally. But dudes pulling nuclear Needles — dainty loafers and flapping purple tracksuit trousers — are a rarer spot.

I’d like to try these out — £550 swing ticket not withstanding. But really, it’s less the shape and style that I’m taken with and more the embossed crocodile pattern. This leather on a chunky Derby and I’m there. Even a chunkier, rounder-toed, commando-soled loafer would see me checking my balance. Right now I’m happy to leave them as weird and wonderful, but not for me. In the same category as the Ascot collar and the cowboy hat.