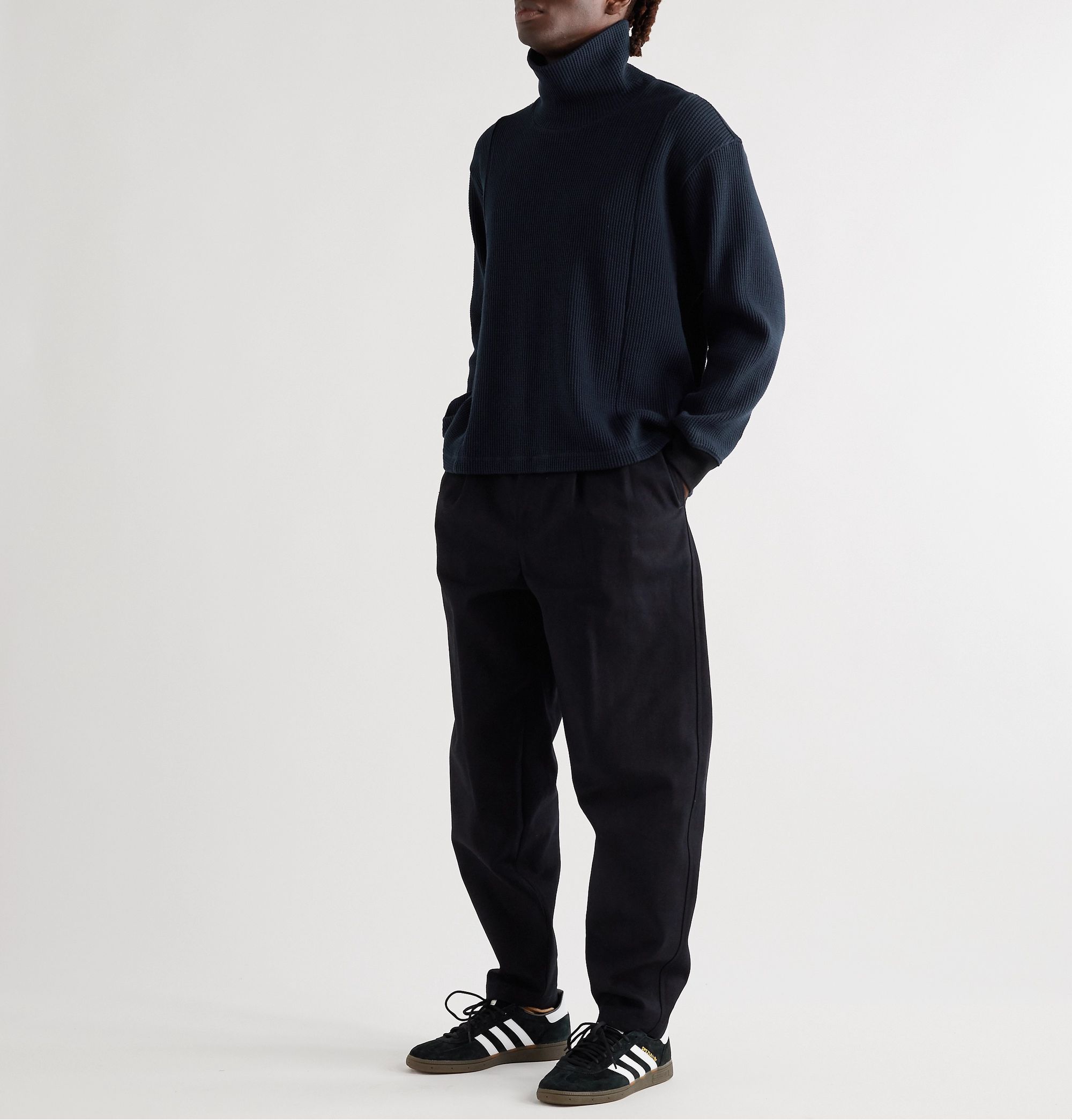 Just a few weeks back The Bureau had some cropped Monitaly sweatshirts in their sale. I didn’t buy one. They dropped to around £60 and I still didn’t push the button. I’m an idiot.

Annoyingly now I’ve got cropped tops on the mind. Not, I should clarify, ‘crop tops’. I understand the market for middle-aged male pole dancers is fairly modest. I mean slightly cropped, as in the hem sitting around the belt-line rather than concertinaing down the body. I’ve got it in my head that for winter, my buffet of looks won’t be complete without a truncated, plain navy knit or sweat, worn over an untucked shirt. It’s the old ‘play on layering’ game. I’ve shuffled a stratum of gilets, waistcoats, long jackets and short jackets, now I want to add knits to the mix.

The £60 Monitalys would have been the perfect tool to see if a shorter boxy top and hangy-outy shirt works for me. But now I’m looking at this. It’s Nicholas Daley. And while it looks reasonably modest of hemline, it’s entirely immodest of price. £235 to find out if a short sweater and exposed shirt is a game-changer? I did say I was an idiot.

My wardrobe permutations to one side, this is a strong piece. Basic, certainly. But the kind of basic that’s rarely discussed without the precursor ‘enhanced’. Meaning quality. And all too frequently exorbitance.

I’ve got big feels for roll-necks this season. A short cut roll-neck, with maybe a stripy shirt hem extending beneath… the more I think about it the more I’m onboard with my own idea. Roll-necks are great anyway. You’ll never look like Steve McQueen (no matter how frequently GQ imply it) but they’re a straight-forward pull-on-and-go during cooler weather.

My concern here is that this one is offered in cotton. A nice looking waffle-knit no question, but cotton nevertheless. Cotton loses its colour over time. And crucially for a roll-neck, it loses its shape. Right now, box fresh, on the dude in the pictures it’s magnificent. After the few wears, a couple of washes and countless yanks over the head would it still look so crispy?

I’m a huge fan of Nicholas Daley. I was in on the brand early doors when it was first stocked at The Bureau. But I can’t justify £235 for a cotton sweater right now. I guess I’ll just have to tough it out with my existing normal hem length knitwear. I sometimes wonder if during this time of coronavirus, economic collapse and mass redundancies, people realise how hard things can be for fans of menswear.