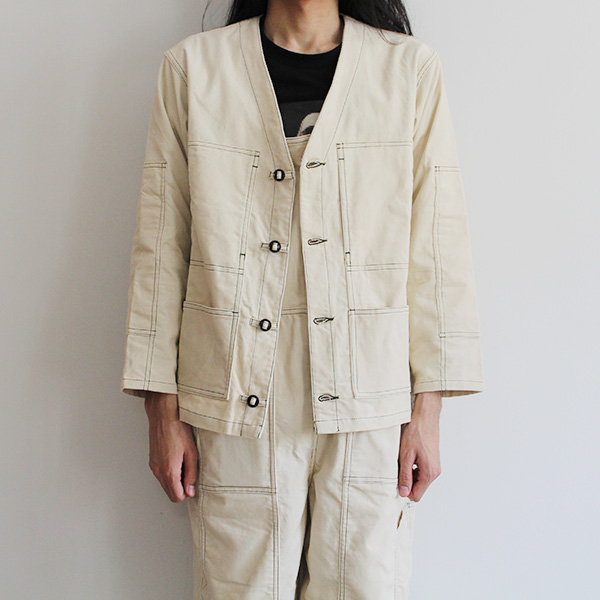 Contrast stitching can be a cruel mistress. Make no mistake, she’s a commitment. Once you’re in, you’re in. And unless you resort to a tub of Dylon and a messy afternoon in the bath, there’s no escape.

Part Frankenstein’s monster, part 90’s Jay-Z, contrast stitching turns the utilitarian right up. Which, when handled responsibly, suggests the casual insouciance of an international troubadour. When handled irresponsibly, you just look like you work with an acetylene torch and sheet metal.

These jackets from the always intriguing Nerdys, manage to sidestep the goggles and hardhat connotations by using corduroy rather than the more traditional denim. That it’s called a ‘Painter Jacket’ is irrelevant — no right minded individual would pop the Dulux in this.

I’m feeling the cream version hard. White for winter and all that. There’s a couple of cinches on the sides (difficult to see from the pics) which will tuck things in if you want. But for me the boxy shape is bang-on as it is. Four big, outlined pockets and that simple v-neck collar, it’s just begging to see some action over a tee, sweater or shirt.

Personally I’d probably wear it with just the top button done up. Like when I’m standing on a pier, shielding my lighter from the wind, scowling out at the cruel waves, trying to look like a tortured novelist. I do that kind of thing a lot.

I recently landed something similar in the Haven sales — one of these Sasquatchfabrix numbers (that Goodhood is cheekily trying to shift at full price.) It’s black nylon, with extremely pronounced white contrast stitching. Although I’m struggling to make it work in a coherent look. What story am I trying to tell? I can’t figure it out. In the parlance of the marketeer, I’m trying to understand the narrative. I’m just not convinced that the story I actually have (that of a balding, clothes-obsessed bloke from the Midlands in a contrast stitched jacket) is all that engaging.