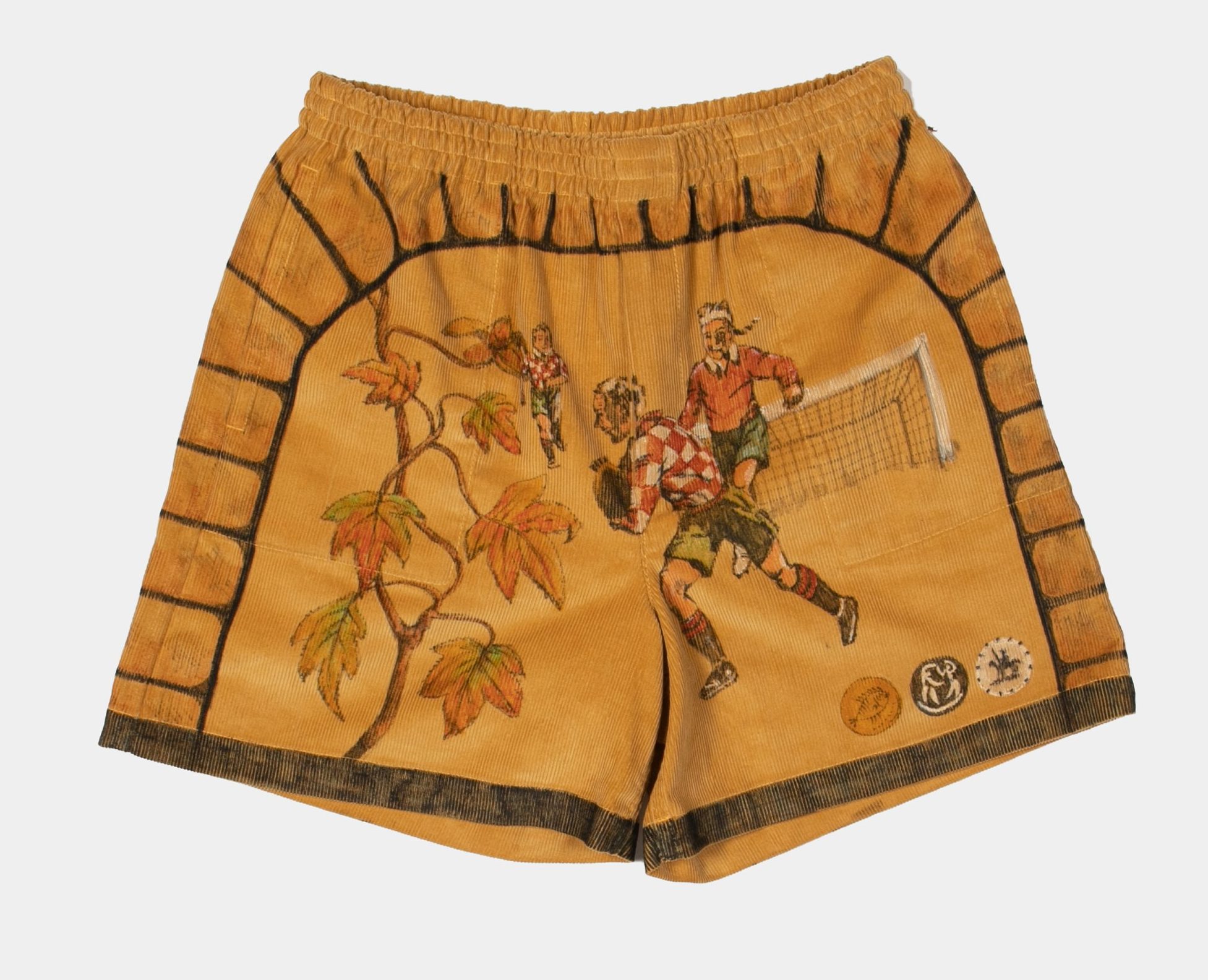 The lockdown rules. For me, they’re now a Netflix drama I used to watch — I caught a few episodes, got confused and dropped out. Many others have stuck with it though. So I occasionally pick up snatches of the ongoing plot. Apparently you can now finger up to four strangers in a car park. While OAPs are allowed out for five minutes a day to mumble some casual racism, before being shoved back inside with a special broom.

I heard something about sport too. During a plague for which there is no cure, it’s important that highly paid, low IQ individuals are allowed to kick, bat and throw balls on TV. Otherwise pointy-shoed blokes will have literally nothing to think about — they’ll begin to paw at their own faces and stumble into traffic. Autopsies will reveal completely hollow heads.

These shorts feature characters doing a sport. It’s a detail that makes me like this garment approximately 100% less. But you never know, one of you out there might be a fan of whatever it is they are doing.

The New York brand Bode are behind this garment — you remember them; one-of-a-kind; shirts made from vintage bed linen. I’m not sure which one of the many sports I’m a huge fan of they’re actually performing in the illustration. The win-bag looks like it’s from the soccer sport. But isn’t that chap (girl?) carrying the ball? Or is that a haggis? And what’s that big beanstalk doing in the middle of the court?

What you can be sure of is, after a knockabout with Bode your wallet will never be the same. We’re talking $578 for a pair of corduroy shorts with a drawing on them. Don’t get me wrong, it a lovely drawing — whatever it is. And doubtless the shorts are magnificently made. I’m just saying, when did half a grand begin to seem plausible for a pair of shorts?

When Bode first launched I was really drawn to their startling reinterpretation of up-cycling. I still have a great respect for their work, although I have become a little fatigued by their unyielding pricing structure. The pieces exhibit such personality, such soul. Shame they’re only accessible to the super-monied. I can see the more flamboyant Toby, binning his raspberry Cordings in favour of these.

Thing is, these are for sale over at Union, LA’s po-faced refectory of all things ‘dope’ and as far from a Sloaney hang-out as is possible to be. I just don’t know anymore. None of my friends would spend £500 on shorts. What am I even doing writing about them? Perhaps I’m just that most pathetic of creatures, a wannabe; face pressed against the window of a club I can’t enter, muttering that everyone inside is a prick anyway.