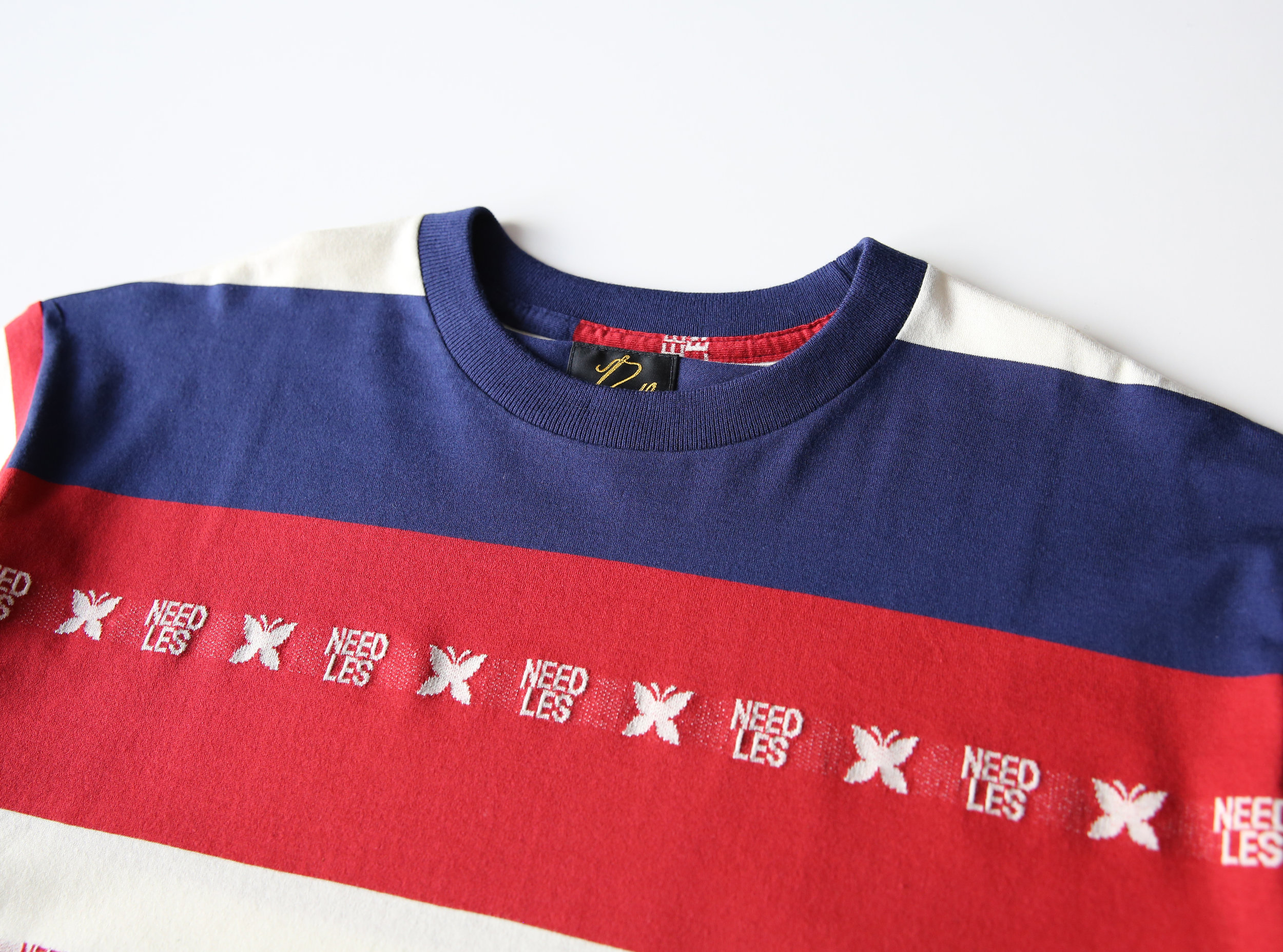 As a rule, I’m rarely drawn to red, white and blue. I guess it’s the nationalistic cultural baggage. It’s a bit British and French tricolour, a bit too flaggy. Yes it’s irrational, and sure to raise the ire of people that care about such things, but l but I see red white and blue and I think bulldog tattoos and flat roof pubs, I think about a hairy fist impacting my gums because I glanced at a bloke’s pint.

The thing is, the brand Needles has a habit of making me want things I would otherwise swerve. Through head designer Keizo Shimizu’s peculiar Japanese lens, the tricolour becomes something different, something compelling. Here are two tops from the latest Needles drop over at Alpha Shadows. I can’t decide which I want more. Both leverage a red, white and blue palette, yet both manage to be significantly more appealing than a stringy youth slurring threats because I brushed against his packet of Nik Naks.

This first one is short sleeved, it’s basically a really expensive tee. But the pattern, that of the brand name and logo is woven into the jacquard fabric, so I guess, that’s where the money goes. In-your-face branding such as this is difficult to justify to the more discriminating clothesman. However this is Needles, we’re not in exhibitionist Supreme territory here. Even with the wearisome A$AP Rocky acting like he discovered the brand, Needles broadly remains a pretty incognito choice.

This second piece, again with a red, white and blue livery, is long-sleeved, and also benefits from a jacquard weave cotton fabric. More of a tribal motif on this one, but (rather like the first top) also carrying a retro winter sports vibe. I kind of like this one too. Long-sleeved is more practical. Of course it doesn’t holler its branding like the first one, but maybe that’s a good thing?

Due to the seemingly eternal flat buying process I’m currently enduring, all this is academic for me. The entire contents of my bank account is, for the foreseeable future, destined to line the pockets of solicitors, surveyors and accountants. Basically, I can’t afford either top. Perhaps if I ever actually ever move into this new abode I’ll stick a Union Jack in the window, see if I can modify my red, white and blue misgivings that way.