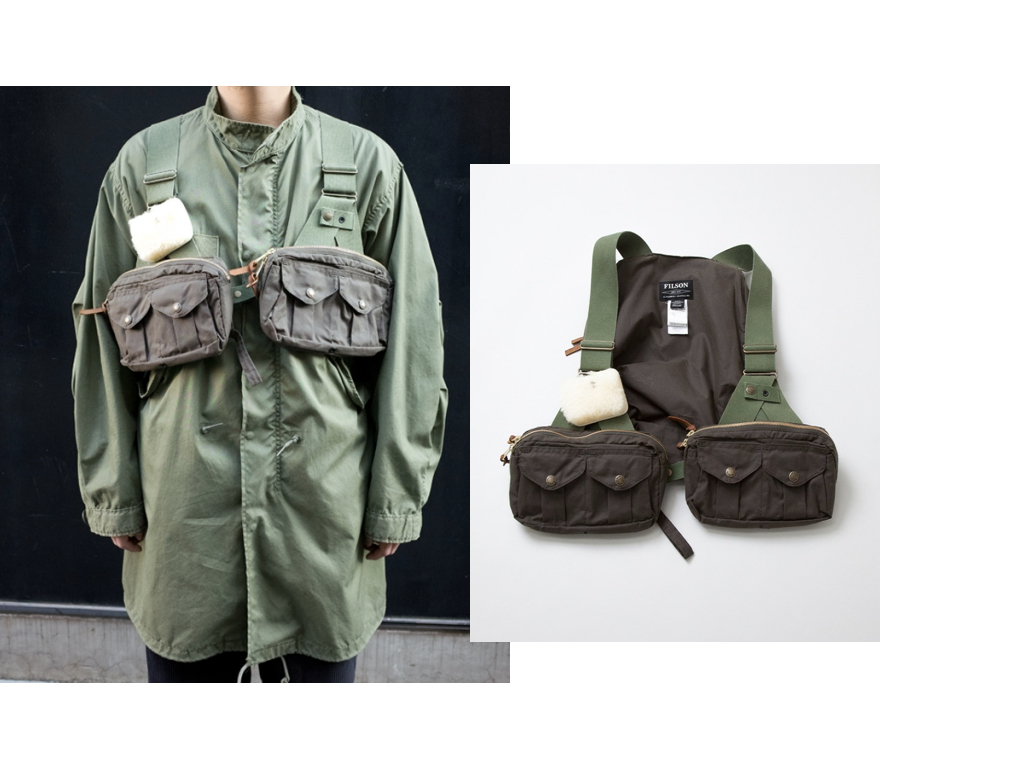 Media coverage of the recent menswear shows in London and Milan has seen a resurgence in the use of the term “heritage”. Apparently patrons have been mixing more traditional fabrics and the odd pair of brogues into the usual turmoil of Off-White, Gucci sneakers and Adidas. Those looking to add a bit of rural flair to their flammable sweatsuit ensemble could do a lot worse that tossing on this Filson vest. It goes without saying you’ll look ludicrous. It’s made for fly fishing for fucks sake. But in the vitally important art of wearing-clothes-that-don’t-go-together-to-look-a-bit-interesting, when has worrying you’ll look like a dick ever come into it?

Similar to some Engineered Garments and South2 West8 garments we’ve looked at before (but with arguably less fashion-finesse and more earthy and honest) this thing is really just a bunch of pockets. A couple of pouches on the front and a dinky rucksack thing on the back. This guy is busting it over a big coat, I’d try it over an EG blazer, before feeling extremely self-conscious, taking it off and having a crisis about how a man of my age ‘should’ dress.

I noticed this over at Japanese retailer Maidens Shop, but I’m sure you could grab it at one of Filson’s UK outlets. It’s even got that little fuzzy, foamy blob on the front, common to much fly fishing garb. It’s to stick your flies in. But not much use for the more urban gentleman. Although I suppose if you’re a cityman with a fuzzy blob on your vest it would prove effective in prompting people to ask why you’ve got a fuzzy blob on your vest. Which if you struggle to make small talk at parties might be actually quite useful.