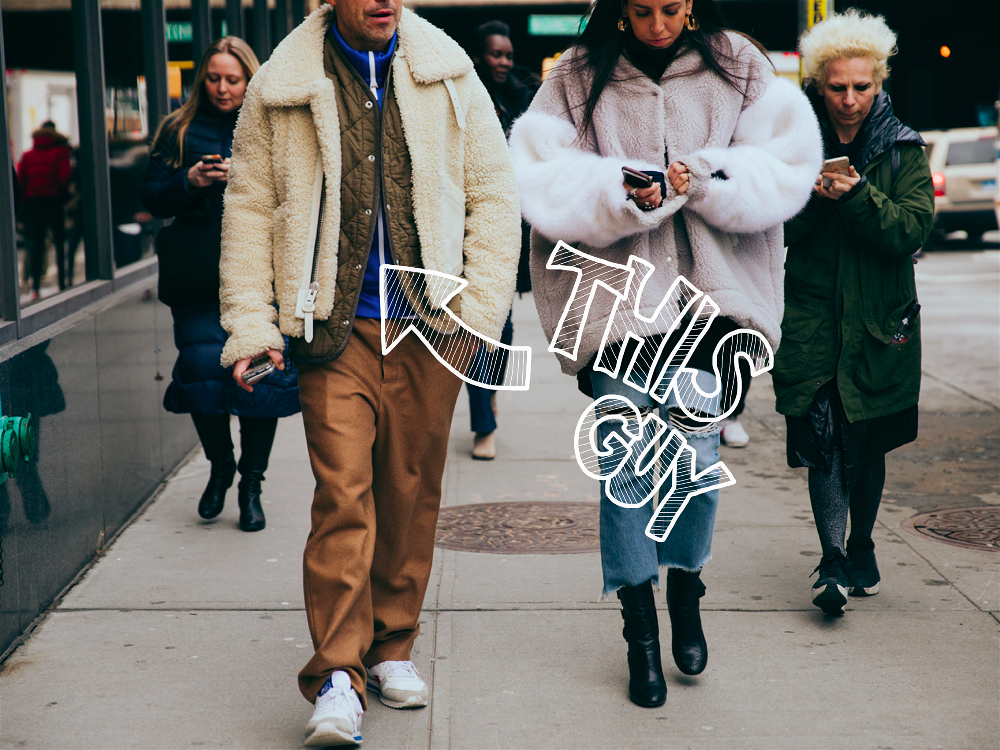 I know who this guy is. I know who he is, in that I can’t remember his name, or what he does. He’s one of those dudes who’s always in fashion show street style pics. I saw this shot yesterday. On Hypebeast, or maybe Highsnobiety, one of those. Anyway, none of that matters. What matters is this dude’s get-up is so ridiculously on point it’s making me re-think my entire understanding of what it means to be a man who wears things. I’ve got five reasons why.

On the hanger, it’s a lady’s coat. Here, it looks like brotherman just unzipped a sheep and climbed in. Teaming it with utilitarian pieces and sneakers anaesthetises the womanly, placing it firmly in the land of the dude. That jumbo zip doesn’t hurt either. Seeing this jacket in a store, I would never imagine it could work like this. That’s why this dude is rulin’.

I can’t imagine this dude’s rarified lifestyle is much bothered by legions of low-rank salesmen all wearing identical Barbour Chelseas. Probably why he feels comfortable rolling with a khaki quilted liner jacket. On it’s own, it’d look kind of standard. But sandwiched between that wooly outer and what’s coming next it just makes sense.

Without wishing to be indelicate, this is not a 20 year old guy. But he’s clearly got the confidence of one. Not only is he triple layering, he’s gone all out with a royal blue tracktop. Now, knowing that this guy is double-fashion connected it’s unlikely to be from American Apparel, although it looks suspiciously like their (now defunct) output. But irrespective of its heritage, what it does is simultaneously toss in some sporty flexing, while providing a stand-out pop of colour. I’m not saying this guy could explain Schrödinger’s equation, but he’s clearly not an idiot.

It’s right back to the 80s, with a concertinaing hemline that gives GQ-ish style formulas (trousers must have a small break on the shoe… etc) the finger. Either he’s just borrowed his dad’s slacks, or he’s taking things in a Vetements inspired normcore direction. Either way, it looks pretty fresh.

The dude’s palette is perfect. Without the blue, it’s nothing. Without the khaki of the liner jacket, the look’d be lacking depth. Even the brown of the trousers, which alone is unspectacular, is irreplaceable as part of the whole. Every hue is doing its job. And he knows it. This is a man who understands that there are two legs on a pair of trousers for a reason. A man who, while getting dressed, never forgets which arm he’s already put through a sleeve. This guy knows what clothing is. He’s an example to us all.