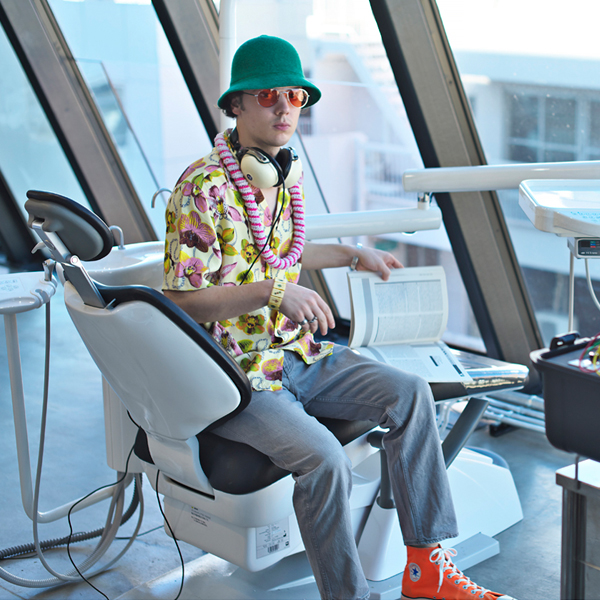 Takes some balls to visit the dentist dressed as a paint-by-numbers Hunter S Thomson. But look at this guy, he’s damn near getting away with it. I admire, but wouldn’t wear, the emerald Kangol and the less said about the tangerine Converse the better. But to even attempt this get-up requires some verve, even if it’s actually a pretend dentists, and he’s only pretending to read that book and probably pretending to like what he’s wearing. Doubtless, the centrepiece of this periodontal shambles is the shirt. Let’s lean back for an examination.

Apparently those are orchids – I had to look it up, I’m not a flowersman – bound together with a chain. As is true of a lot of menswear, I expect there’s also some unnecessary statement in there. You know the sort of thing, nature being enslaved by man or some-such. Although, on closer examination the flowers are bigger than the chain? Perhaps it’s actually saying, “watch the fuck out, if we don’t speed up our decimation of the planet, we might be overrun by giant flowers.” Maybe Black Weirdos, the Japanese makers of this piece are anticipating a Day of the Triffids type situation.

Or maybe, the Black Weirdos just think it looks cool. But just to check, I’ve spent a few hours reading botanical encyclopaedias, just wanted to see if there are any giant plants that slither about the place, stinging people with their dribbly tongues. Turns out there aren’t.