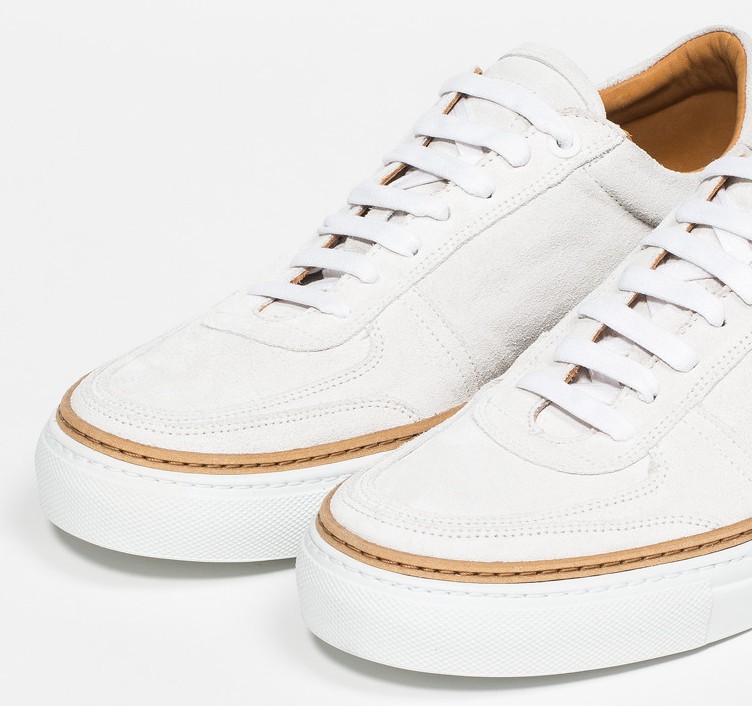 I think it’s pretty clear by now what the modern, educated, professional women is looking for in a beau. Sense of humour, not living with your mum and generally being tolerable to be around aren’t important anymore. My exhaustive research suggests these familiar traits are all trumped by owning a pair of costly, but minimally designed, obscurely branded kicks. If I had a pound for every available girl who’s asked me if I, “know any single guys who, wear really, really expensive, white trainers from, like, an imported brand I’ve never heard of?” Well, I’d have an amount of pounds, a lot of pounds. More than, say, five.

Assuming you are so desperate to get mating that you’re prepared to believe the above, these shoes are for you. They’re by New York brand No. 288, they don’t sell them in the UK and they cost 462 dollar bills. Which in quids, is probably about 300 and a bit. Either way, it’s a ball-ton.

Calf suede upper, tanned leather accents, thick rubber sole – they’re all styles of premium, as you’d demand for that level of dollarage. And as I’ve said before on this very blog, I personally prefer a simple white sneaker than some pimped out Nike X somebodyorother. So these have got my vote, if not my actual dollar. I mean, shit. To get these to the UK you’d have to drop more stacks on postage and probably more on the aeroplane police’s ‘Hey dickwit, We’ve Caught You Buying Something From The US’ Tax. After all that, they’d probably end up costing 500 quid. Which is scientifically the price of being single.