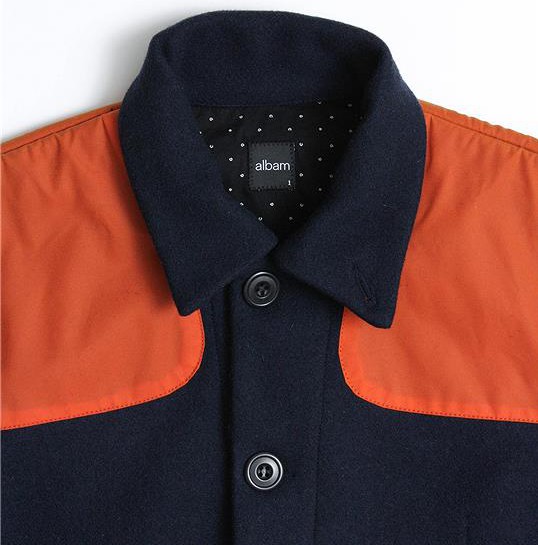 If I had to pick a vocation I’d be least appropriate for, digging the road would be up there. It all looks a bit hard. Scraping away at the road with pitchforks. Putting bits of road in baskets. I don’t get it. Wouldn’t they rather be sitting in a cafe, sipping a latte, checking out Buzzfeed? Couldn’t they get robots to do the work? Haven’t they ever thought of that?

I intend no slight on the fine gentlemen who spade-it-up on the reg. I’d just be utterly shit at it. I’m too weak. I’m too lazy. And I feel the cold. Plus, I don’t care about roads. They’re all a bit tarmacy. All a bit stoney and hard. They’re just rubbish. Fuck ’em, I say.

I’d still probably get on the end of this coat though. It’s all about the manual labour vibe. A concept I’m medically allergic to, but, you know, I don’t mind looking like I know one end of a rake from the other.

These coats have just dropped over at Albam. Dunno if I’d go full orange – that feels like nuclear road-drill territory. But the grey/green and navy/navy combos are pretty strong.

Onboard there’s 500 gram wool, a couple of external patch pockets and the shoulder detail is in British waxed cotton, which should provide an element of shower protection. There’s also a buggy lining, featuring a smattering of dotted finesse.

Tonnage wise, these are at two and a half. Which is a good price for some winter ammunition.

Speaking with much Albam experience, their kit wears well, you could definitely do a lot worse. Assuming you’re a bro who wants ladies to think he’s not scared of a trowel, while actually preferring an afternoon with Homes Under The Hammer and an entire Battenberg.