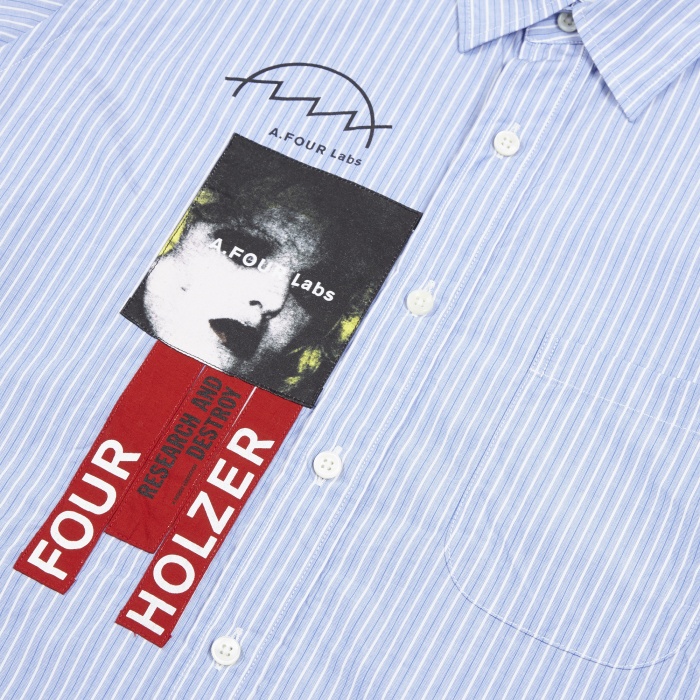 London artbro Lucas Price and Japanese scissorman Kazuki Kuraishi have double-ended the A.Four AW14 drop over at Goodhood. This shirt pretty much encapsulates the range. There’s a whole Seditionaries (Westwood and McLaren’s mid-70s art-punk store) vibe in the mix. And, at the risk of appearing terrifyingly low-brow, it reminds me of 90s Covent Garden stalwart Burro. You remember Burro? ‘No Alla Violenza’ t-shirts? They were all up in The Face every month. I think The Charlatans used to wear their kit? Or maybe the Inspirals? Or Northside?

Anyway, this shirt looks a bit like a brand from the 90s that no one remembers. And it’s 198 quid. Fancy reading on…?

It’s basically a blue stripy shirt with some stuff on it. Patchwork detail, logo tab, printing on front and rear… It looks a bit like Comme, a bit like old Raf Simons and no doubt, wearing this, in certain circles, you’d be hailed as a sartorilord.  I don’t know what those circles are though. I wish someone would introduce me to those circles. I’ve got a suspicion the circle extends only as far as people that work in Goodhood.

If you’ve got the heat to drop on this, good luck to you, you’re an edgier bro than I. Me I’m gonna just Google… fuck me, they’re still going. Burro are… Oh, it’s kind of a blog. And they’re selling the same T-shirts they sold in 1993. On the shittest website I’ve ever seen.