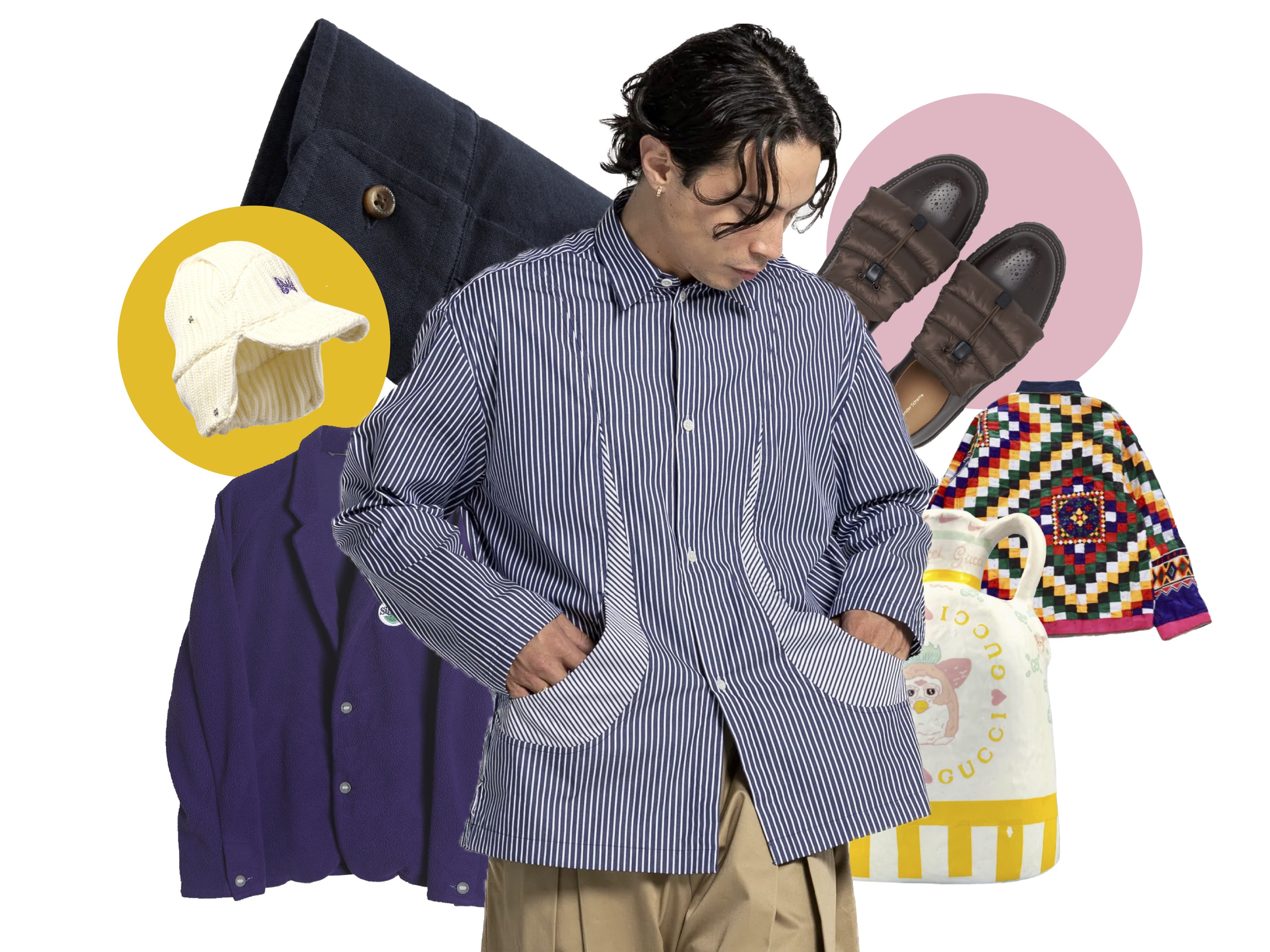 Quite by accident, I recently found myself trying to cross through Oxford Circus just as the Christmas lights were being switched on. The crowds were terrifying. It was like trying to squeeze through a Spartan phalanx made of Adidas Gazelles, H&M bags and iPhones. It’s hardly surprising we haven’t solved the climate crisis, the rise of the far right or the economy, we’re still a race bewitched to a standstill by a string of coloured bulbs.

Yup, it’s mid-November again. An awkward time for the clothing enthusiast. Late-season pieces are still dropping, but you know the sales are around the corner. It’s a weird liminal space, neither one thing or the other: pulling the trigger on a purchase can feel frivolous, but what if the piece you want sells out before discount time? What’s worse being broke or missing out? Plus of course, the festivities are incoming, and with them the joyous inconvenience of having to buy other people stuff.

Being too into clothing is both a delight and a curse.

In an attempt to draw pleasure from the idea of appreciation rather than ownership, here’s a round-up of pieces that have caught my eye but not (yet) my wallet.

Like a dark phantom of shirts I have known, this deep blue button-down feels almost too familiar. It’s no game-changer but rather, I think, one for those who appreciate the style of the inconspicuous. Stealth wealth, you might say  —  if you’re of an age to remember Arena magazine’s popularisation of the phrase back in the 90s.

To be blunt, the main sell is the JJJJound branding: check that dinky pocket tab and those delicious looking buttons. After all, not every fit has to look like you’ve done ten rounds with a Nepenthes sample sale. This shirt celebrates an appreciation of restraint.

That said, look at the state of this madness. Fresh in from Needles Rebuild and apparently part jacket part hallucination, this will definitely get you noticed down Aldi. It’s a bit too Janette Manrara for my current state of mind, but if you’re thirsty for serotonin and don’t mind looking like a druid’s fruit bowl you’re in.

Last Sunday evening I drunkenly performed a rumba solo to Madonna’s Frozen at a dinner party. The other guests remained seated, ignored me, and carried on chatting. If I’d been wearing this shirt, I suspect I would have attracted more of an audience.

I know right, no! But hang on, think about it. Think about all the guys in the pub wearing standard beanies, caps and bucket hats. Now think about you in this. Hold the fucking phone! Ridiculous, certainly. Good ridiculous, very possibly.

What do you mean you’re into oversized clothing but haven’t troubled Sillage? That’s not even a thing. I grabbed a Sillage two button blazer last year and it’s now a rotational staple. Be warned though, oversized is underselling it. These garments are basically XXXL, but with the right length sleeves.

It appears Sillage is playing with visible branding for the first time and have gone with an identity that wouldn’t look out of place in the toilet roll aisle. Personal hygiene vibes on a formal blazer shape made out of fleece  — the way forward?

I’ve never really got the whole New Balance thing. Dadcore anonymity in all the colours of the biscuit tin — from Custard Cream to Bourbon. I guess I’m not sufficiently invested in the details, but they all look the same to me.

Where footwear is concerned I’m frequently drawn to the lesser trodden ground. Sure, the post-sneaker landscape is once more undergoing a (nonsensical) hyping, but that has nothing to do with my reasons for spotlighting these rugged lace-ups. I mean, just look at them. I have no idea what the air bag is for, but it’s making me feel all my current shoes are nude without one.

I don’t often swerve into homeware. But if your immaculately curated shelves could do with a respite from all that Kinto, Hay, Ferm Living and Muuto, you might want to check out Rapiditas. Ugly/ugly, or ugly/beautiful? I’m firmly in the latter camp. Naive art meets airport luxury, and you can put your flowers in it. It’ll probably disrupt your wall of tasteful beige and olive, but maybe that’s a good thing.