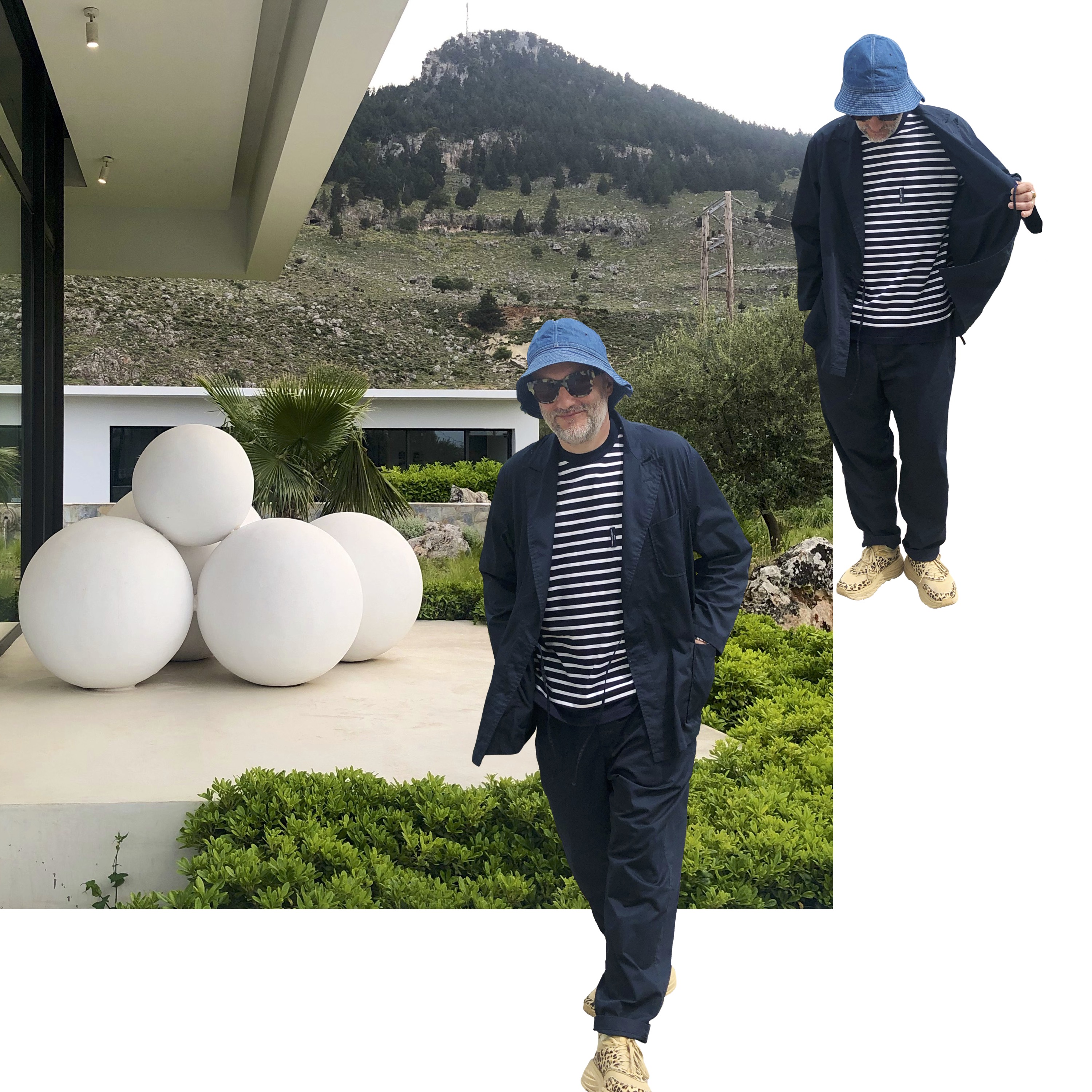 Like the Colossus of Rhodes he stands there. Legs spread, hands on hips, shoulders like landing strips. His Speedos are so tiny you can see what he’s had for breakfast.

On every beach, there’s always one. The muscle man. The adonis. The alpha asshole. He is motionless but for the steady side-to-side of his head, slowly surveying the physical inadequates who have dared to lie upon his sands.

I know, I’m one of them. I’m double-shaded beneath a parasol and a Kapital bucket hat, fag hanging from my mouth. I reach for a swig of Fanta and notice my knees are the colour of a hen’s comb and that I’ve been dropping ash on my Studio Nicholson shorts.

A blazing Grecian beach is not the place for a man of clothes.

Last week I was in Rhodes. I stayed at the Casa Cook hotel, which I can recommend for fans of angular architecture, infinity pools and laconic waiters who take a fucking age to bring you a latte.

One evening a creature crawled out of one of the drains by the pool. It had the body of a fish and the smiling face of a grown man. It swam, then jumped, then scampered straight through the automatic doors into the restaurant. I shrieked like a boiling kettle and tried to swat at it with a napkin. The waiters stared at me like I’d lost my mind, they told me it was just a cricket. I have no idea what zoological literature led them to this conclusion. As far as I’m concerned I had a near miss with that thing that went in Chekov’s rubber ear in Wrath of Khan.

Alien slugs aside, staying in a posh place like Casa Cook does rather shield you from the real Rhodes. Step beyond the ornamental cacti, the continually sieved pools and the ceaseless ‘hotel house’ soundtrack and things get grotty quickly. And by grotty I mean rude. The nearest convienence store proudly offered a selection of wooden key rings shaped like giant dicks. While a trip to neighbouring tourist haunt Lindos proved that the hardcore sex playing cards market is still alive and well and available right next to the ice creams. I’m pretty sure I heard a kid ask daddy for, “a 69 with two chocolate fingers.”

For a night-time promenade (read: hyper-bougie dinner and reservoir of booze) in Rhodes old town, I wore this new poly/cotton suit from RANDT. The jacket is boxy, with a slightly truncated sleeve and fastens with a side-tie. The trousers have both an elasticated waist and a drawstring and, while they’re a little slimmer than my typical silhouette, I did find them super comfy and easy to wear.

I also gave this Comme des Garçons Homme tee a run out for the first time. I’m usually pretty cagey about wearing stripes these days. I struggle to separate them from that whole nautical, heritage menswear, ‘young dad pushing a buggy in slim jeans and Vejas‘ vibe. Still, on this occasion, over three thousand miles from my ends, it felt like a risk worth taking.

Back on the baking beach I couldn’t help but gawp at the Colossus. His beard was so achingly groomed it looked drawn-on in Procreate. As he methodically oiled himself up, he stood, staring down the horizon, as though waiting for it to reveal some existential truth. His girl was on a blanket beneath him like a collapsed marionette. I watched as he lifted each of her flaccid limbs in turn and slowly, ever so slowly, gave her a damn good greasing too. Up to that point I’d felt peckish, suddenly I felt strangely full.

“Guys like that are such dicks”, I said to my girl.

I took a swig of scalding Fanta, coughed and it flew out my nose all over my t-shirt.