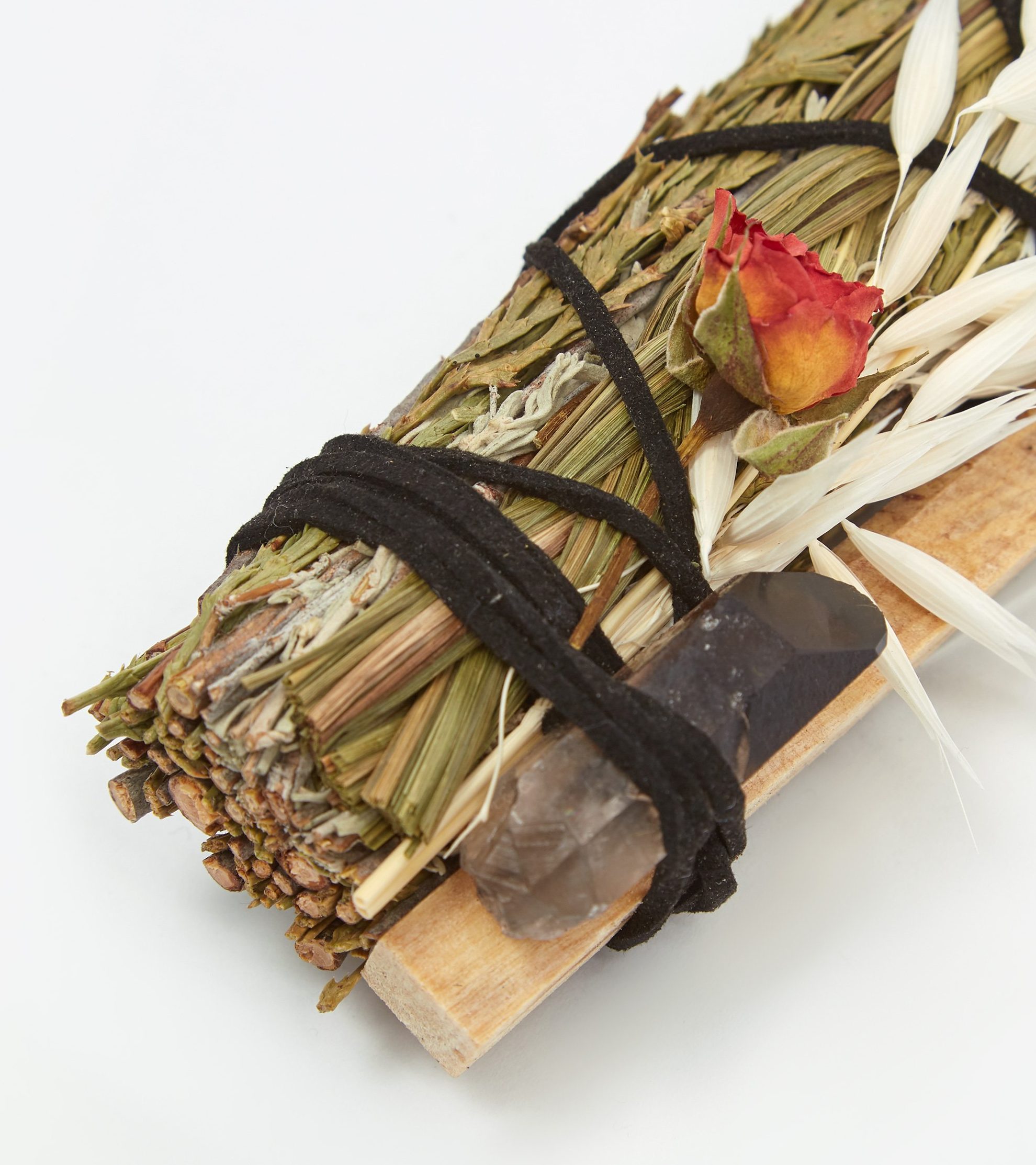 With the greatest of respect, you’ve got to be fucking kidding me. I love Goodhood. But they appear to be swerving into Goop territory now. Have you seen their new stock by the brand She’s Lost Control? Check out the ‘Handcrafted Herbal Ritual Bundle‘, instructions: “use the aromatic smoke to charge the smoky quartz crystal and then set a positive intention.” And only 32 quid? Can you believe it? I must say I’m having trouble.

This is proper Paltrow territory — what next, actual snake oil and fanny candles? If there’s anything worse than a spiritualist it’s a trendy spiritualist.

Or maybe you fancy the ‘Luck Giftset‘. This one includes a pyrite crystal which apparently helps with “money manifestation”. Here’s an idea. Don’t spend £32 on a Herbal Bundle and don’t spend £24 on a Luck Set, knickers, knackers, knockers… you’ve manifested 56 quid.

I know, boo-hoo-hoo, you’re not respecting my beliefs. It’s a free country, people can believe what they want, man. And yes, of course they can. But seriously, in a world where our leaders openly lie and the vast majority of the ‘free’ press has clear political bias, the last thing we need is for otherwise intelligent people regressing to medievalism. Human beings learned stones aren’t magic hundreds of years ago. They never were and they still aren’t. Even if they come gift wrapped from one of London’s coolest stores.

“Intention is an energetic signal that we send out” says Jill Urwin, owner of She’s Lost Control, “crystals can also help you amplify that.” And the thing is, no it fucking isn’t. And no it fucking can’t. If there was any evidence to support that twaddle, any evidence at all, anywhere in the world, ever, it’d be front page news. Crystals don’t do anything. Nothing. Except look nice. And even that’s a matter of taste.

Of course some people still believe. It’s a choice, but really little more than wilful ignorance. Perhaps they seek solace in the fluffy idea that they’re connected to something bigger than themselves. But the thing is, just because it sounds all grand and spiritual, it doesn’t make it profound. Quite the opposite, it’s simple self-preservation. Whether you’re a believer or not, you’re just scared of stuff — of failure, of disaster, of death — just like everyone else. Unfortunately the world is a fucker and burning a ball of sweetgrass isn’t going to change that.

If you’re a believer, nothing I’m saying will change your mind. Your cognitive bias is already happy to throw up barriers against opinions that contradict your beliefs. So enjoy buying your crystals and detox beads. Or maybe try the ‘Protection Gift Set’. It’s only £24 and you get a spiced fig and quartz room/body spray that offers ‘protection’. Against what it doesn’t say. I’m guessing werewolves. Possibly Gorgons.

Better yet, if you find my comments especially distasteful, buy a ‘magik’ book from a fashion boutique and put a curse on me. I’m bored already, another amount of ‘nothing fucking happening whatsoever’ isn’t going make any difference.