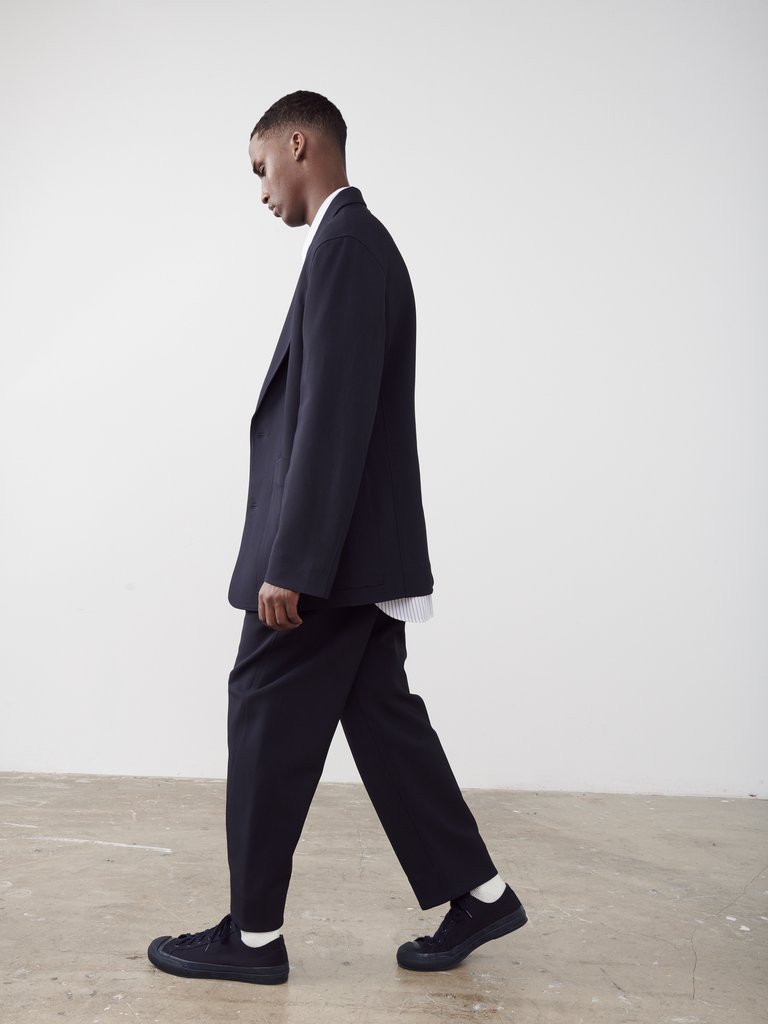 I own one pair of Studio Nicholson ‘Volume pants’. After the notorious Needles HD Pants, they are the biggest trousers I own. At least around the legs. Thing is, I was lucky to get them. I’m just going to say it, I’m not a fat man. Nothing against the turbo-sized. I just don’t think, by any scientific measure I qualify as fat, or even that large. And yet I can only fit into the XL. I was lucky there was one pair of XLs in the sale. And I do wear them. But too frequently I feel the bite of tight fabric around the waist, followed quickly by the thought that yes, I must be a very very fat man.

I mention this because Studio Nicholson are offering some savagely cool suiting. Bought as separates, but ideally worn together. So now I want a Studio Nicholson suit. Yet the brand seems to think I belong on a stage next to a pair of conjoined twins and a bearded women.

Of course, the solution is don’t eat an entire £1 Fruit & Nut every night for ‘pudding’. But as a man of small intellect and even less discipline, I prefer to think  it must be down to those rascals at Studio Nicholson trying to save money on waist fabric.

Anyway, if you’re looking to self-assemble a suit you’re going to need the ‘Adagio Pant‘ and the ‘Conde Jacket‘. But first another word of warning. Even if you just speak the names of these pieces out loud you’ll hear the faint sound of a ‘ker-ching’. A bit like Candyman, but less like a rusty hook removing your larynx and more like you’ll have to live on sweetcorn on toast for the rest of the month. The jacket is £625 and the trousers are a deeply inconvenient £395. When did trousers start costing £400? They’re made of 97% Viscose, 3% Elastane. They’ve got two legs and a zip.

The jacket shape is cool. Quite progressive, in that it’s a low two-button, rather than the safe and familiar three-button. But it is slouchy, rather like 90’s tailoring, just absent shoulder pads.

If you’ve got weddings in your Filofax, you could do a lot worse. I know the ‘trend’ in nuptials these days is dressed down, but seriously (I’m actually with the GQs and Esquires on this one) make an effort. Even worn with simple kicks, as illustrated, you’ll hose 1000% of the other attendees. Maybe even wear your shirt hanging out, again like the guy in the pics. I wonder if, beneath his shirt, that dude can’t fasten his waist button either?