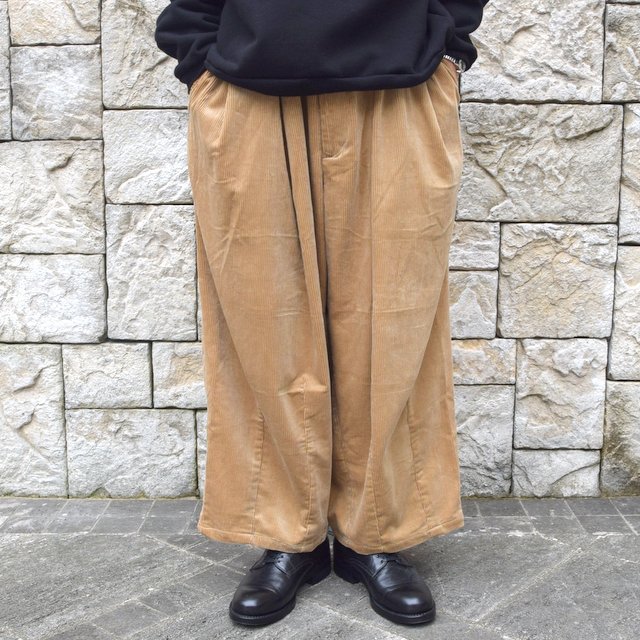 It’s mildly remarkable, but also secretly rather pleasing, that the easiest way to turn heads and provoke confusion in menswearland remains the wearing of large trousers. The slim cut continues its strangle-hold on legwear; contrary to numerous designers, from niche workwear artisans to chintzy runway brands, proposing different. As a signifier of taste, baggy vs slim is as divisive as leave vs remain. It just so happens that, as is most frequently the case, the scruffy art students of east London have it right, while regional fake-baked gym-bodies have it wrong. Large trousers make you look brave, challenging and counter-cultural. Skinny or slim make you look like you think All Saints is edgy.

Of course I’m generalising and being intentionally supercilious. But the truth remains, slim jeans are the standard, they’re safe, they have nothing new to say. While as la-di-da as it sounds, wider cut trousers do make a statement. The wider they are, the harder you’re swimming against the tide. The less taper they have, the greater the sense that you’re comfortable on the road less traveled. These mammoth cords from Japanese brand Is-ness are on a road even Google Maps can’t find.

Over at retailer Acoustics the description suggests they’re, “quite spacious overall.” Typical Japanese understatement there. These are clearly fucking huge trousers. A larger pair of trousers it’s difficult to imagine. Outside of space exploration or professional clowning more leg-cloth than this is probably unwise. This is the limit. The apex of what a human man can and should use to cover his knees.

Menswearmen will see commonalities of scale with the Needles H.D Pant. Regulars here might remember I recently bought and spotlighted a pair of H.D Pants. Even more recently I also picked up a pair of Needles H.D BDU pants – the difference being the addition of combat style side pockets and, crucially, tie-cords at the hems. The tie-cords make a big difference. While the full width remains the same (think Turbo in Breakdance the movie) you can at least rein in the flappage around the ankles. I can’t see such detail on these Is-ness numbers. No cinching, no curbing the volume, they’re all or nothing. Lunacy to some, the only sensible choice for others, truly the Brexit of trousers.