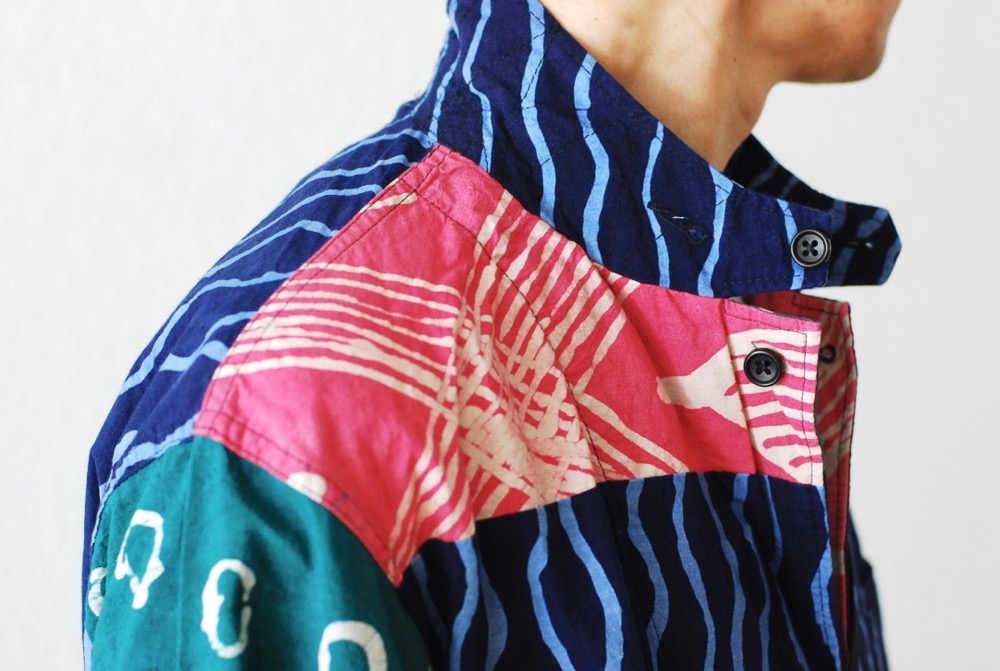 Yesterday, my girl was doing some household chores while loudly singing Crazy For You by Madonna. After about 20 minutes, I pointed out that I was now thoroughly aware that ‘it’s all brand new’ and if I ‘touched her once I would know it’s true’. She smiled at me and continued singing. Under most circumstances I’d expect such dry asides to wither a target into submission. A further seven or so butchered verses later and I had to concede defeat. I have to admire her confidence. Totally resolute, utterly fearless. The audible equivalent of this jacket.

I’ll say now, you won’t get this in the UK. It’s part of a collaboration between Engineered Garments and fellow New York menswear brand Post-Imperial. I’ve seen it sold over on Post-Imperial’s US site and Japan’s Digital Mountain. What Post-Imperial bring to the party is a clear focus on colour and pattern. Their fabrics are all hand-made in Nigeria, using a process called Adire, which involves hand-painting the designs using cassava starch or wax base. This resists dye and results in the kind of bold, colourful pattering that’ll take someone’s eye out.

This is the EG Loiter style jacket , a simple blazer, with patched flap pockets and buttons that run north to the neck. When the sun drops, fasten to the top to keep the chills out. In its regular, navy, olive or grey incarnations, it’s practical, easy to throw over anything and smart. Via the Post-Imperial party machine however, it’s a rather different animal. Brazen and vivacious; just add a jug of Lilt Martini and a limbo pole and you’re a one-man festival.

It might be a little too intrepid for some of you. I mean, there’s no way you’re not going to get comments. To polite eyes it’s the very essence of a Nigerian Bolojo rave. The less kind might suggest you’ve forgotten your squirty boutonnière.