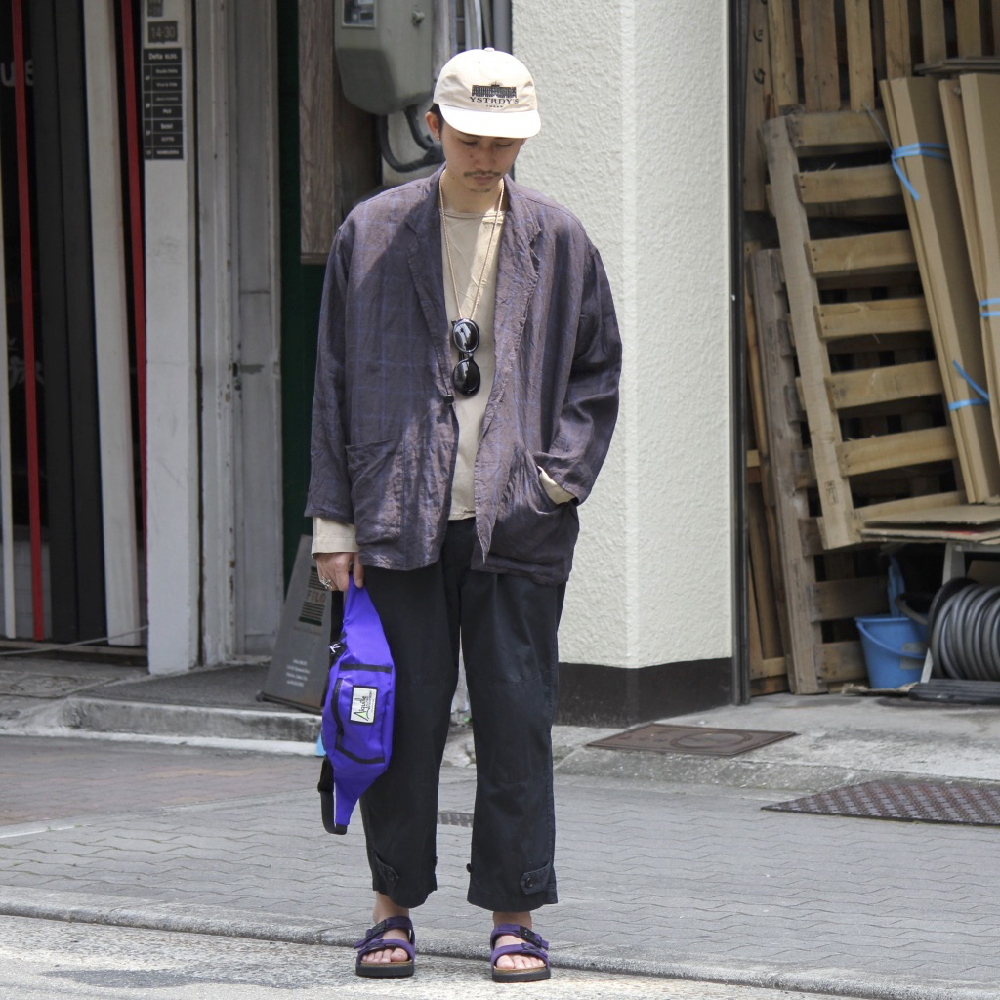 At first glance, the jacket above looks fairly standard. Rumpled linen, plain, loose fitting. And it’s certainly that. Unlined and easy to throw on. It’s a spring/summer staple for a dude somewhere in the stylistic hinterland between terrifyingly obscure Japanese brands, and dancing for pennies and pre-packet sandwiches outside Victoria tube station. It’s a couple of hundred quid that looks like you found it on the pavement, alongside a carrier bag full of garden string and a slightly burned children’s doll. Obviously it’s cool as balls.

But even in it’s apparent simplicity there’s something interesting to note here. It’s utilitarian but progressive; the cut of this jacket is signalling an alternative to the prevalent menswear norms.

Available in navy check, or blue stripe, it’s a one button jacket with a longer lapel. The kind of lapel we haven’t seen since the 80s. Sure, catwalk brands bang out 80s one minute, then 70s, then 90s; a schizophrenic tossing of influences against a wall to see what sticks, or rather sells. But to my eyes, this is different. This is a tiny unassuming brand, one rooted in Japanese casualwear, just moving things along a little bit.

So what’s the brand? Flipts&Dobbels. If it’s any consolation, it doesn’t mean anything to me either. It’s one of those fascinating looking imprints that crop up from time to time on Japanese retailers like Ray Coal. With no profile in the UK, this is the kind of brand you have to hunt down, with utter determination to avoid wearing the same fits as your bros.

The cut is all. Think about men’s blazers. From Universal Works at the lower end, to more covetable and enigmatic brands like Sanca, it’s three button, high-cut all the way; neat, practical and reassuring. Here the fit is A line, kind of triangular, flaring away slightly from the body. While the lengthy drop to the button provides a proud and exposing V of whatever you’re wearing beneath. It’s definitely different.

I’ve got a Comme des Garçons Homme blazer, from the early 00s, that does the same job as this. It’s two button, but features a low V. It’s black though and I haven’t worn it for years. But this Flipts&Dobbels offering makes me want to reconsider it. I want to look like the guy right at the top of this post. A bit moody, a bit despondent, wrestling with the intellectual conundrums of the day, while staring at the tarmac, like it’ll provide the answers. At least that’s how I’d feel in my head. Right up until a passerby hands me some change.