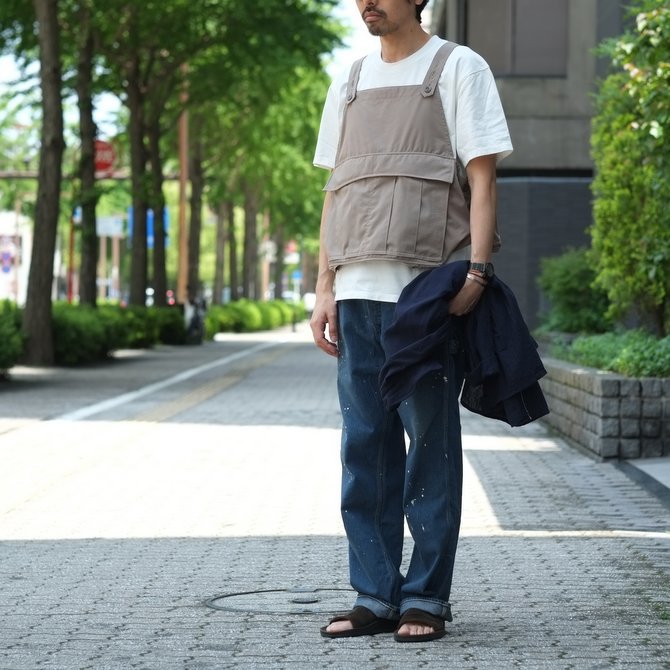 Where to find a weird vest that by virtue of its obscurity in the UK, is less ‘overground’ than Engineered Garments, Sassafras and Post Overalls? I imagine it’s a question that manifests like a chambray phantasm in your most feverish nightmares. Well calm yourself. Flannel the wet from your brow. This ridiculous vest might fit the bill. It’s from Japanese imprint BROWN by 2-Tacs. It’s called a ‘Seed-It’ vest. It’s probably for dispensing seeds, you know, like strange gardening types do instead of watching boxset TV. But it’d look well furious under a blazer. Furious, ridiculous and weird. Consider your nocturnal torment at an end.

The thing about this is that it looks like an apron, but then it just stops. It’s the kind of detail that would doubtless get hardcore apron fanciers hot under their 100% Irish linen. But as I say, this isn’t an apron, it’s a seed dispenser. So anyone with fundamentalist apron leanings can frankly do one.

In fact its truncated form is exactly what makes it so cool. Worn under a jacket you’d have the aprony top bit and the short hem, showing acres of shirt or tee beneath. I don’t want to say that it looks a bit like a bulletproof vest, even though it sort of does. I’d rather consider it beak proof. Or wasp proof. Or whatever else might interrupt the flow of the enthusiastic seedsman.

Apparently it’s made of ‘flex chambray’. To my eyes it looks kind of crude, a little stiff, a bit roughly hewn. But maybe this basic-ness would rock together nicely with a more luxurious light wool jacket. Anyway, it’s by BROWN by 2-Tacs, a brand very few will know, thus increasing its desirability by a few thousand percent. If nothing else, buying this will free you from the aforementioned nightmares you are not currently having because they’re stupid and I made them up.