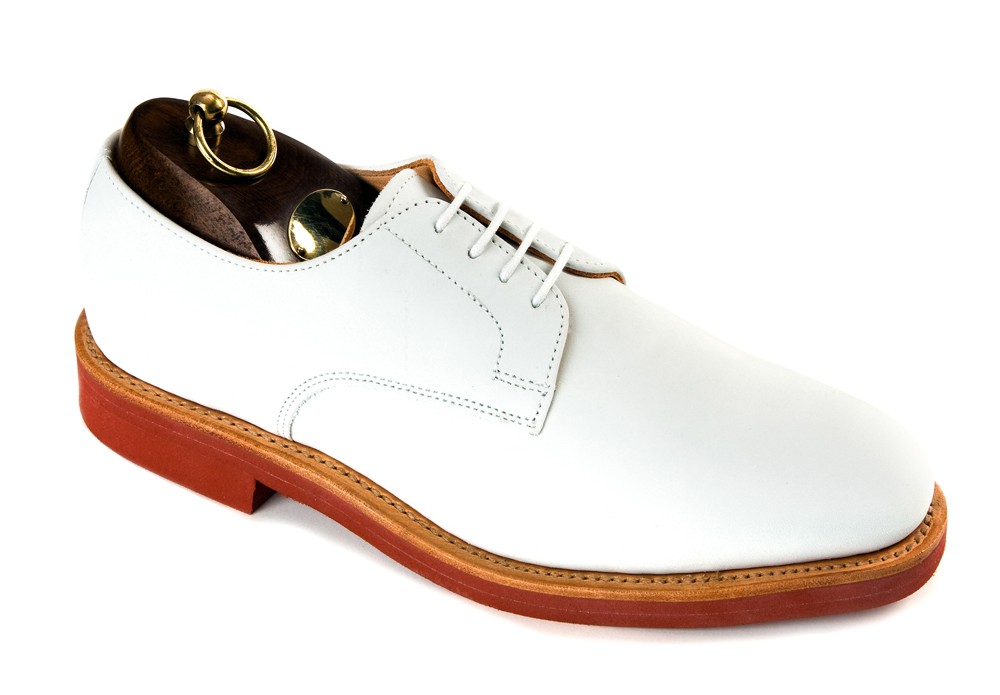 All of a sudden, I’m feeling white shoes. I’ve got it in my head that, for summer, a white, casual soled, leather shoe, teamed with washed out green military cargo pants is the way to go. I have seen or read nothing to suggest that this is the case. Mans just got the feels. And as such, mans must act.

I’ve dropped large on a pair of white leather shoes once before. Trickers they were, brogues, and while I got some wear from them, they ultimately didn’t quite gel with my lifestyle (in other words my mates gave me loads of static about them until I felt mad-foolish.) I ended up dying them (yep, you can do that) brown. I wore them twice and grew to hate what I’d done to them. They’re in a cupboard somewhere. I’m ashamed.

So, I might start fresh with a new pair of slightly more affordable Sanders. Kind of feel I wish they were brogues, rather than plain Derbys, but I still think these could work. They’re Nubuck, not shiny leather, so I’d have to be careful of scuffages.

I just think white shoes and washed out cargos is the dope move. You know, the washed out cotton, at odds with the semi-formality of the bright white shoe? It’s the vibe of a dude who’s just crafted a poem, or noted down a really smart cultural observation in his Moleskine. He’s a guy who’s trademark is white shoes, but he just wears them, it’s not an overt statement or anything, it’s just louche, dudeish… it just is. I’m not overthinking this. Come on picture it. You feeling what I’m putting out there? Yes? No? Hello? God I feel so alone sometimes. I’m going to write a poem about it.