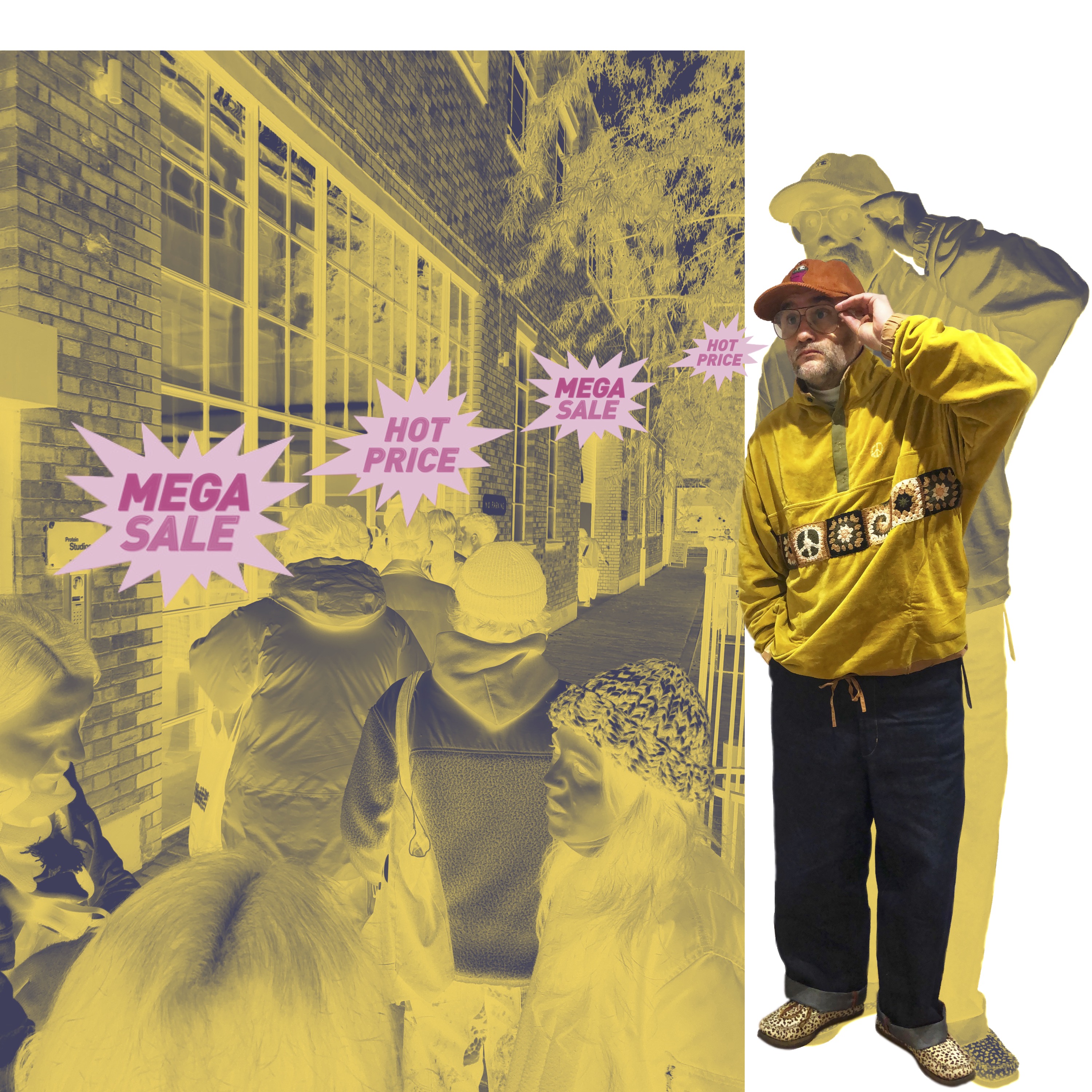 “Homme Plisse from The Box on Thursday. There’s a mark on the back but with a long top you can’t see.”

If you’re into clothing, there’s no better place to meet your kind of people than in the queue for a sample sale.

Increasingly ubiquitous, but rarely discussed; sample sales thrill the sartorially minded, as much as they confuse random passers-by.

“Excuse me, what’s this queue for?”

There’s a kind of micro-culture to sample sales. If you get it, you’re part of it. You know why you’re waiting an hour in the cold and so does everyone in the line. The sense of kinship and mutual appreciation is tangible.

The non-Londoners I know often seem astonished by tales from the frontline of bargain shopping. I’m not sure why. There must be some regional events? I know Story MFG recently erected the trestle tables in Brighton. And while not a sample sale as such, if your taste in designer labels is best described as ‘indiscriminate’, there’s always T. K. Maxx.

I guess it’s because of the frequency and quality of London events. On any given weekend some brand is serving up piles of discounted merch. No ho-hum 20% either. We’re talking 70%, 80%. We’re talking boxes of unsold accessories for a tenner. It’s as real as it gets.

“I’m after some trousers”, a girl told me in the line before the London Story MFG event last week. No mention of style, or fit, or colour… just ‘trousers’. That’s the power of the sample sale right there.

Dunno about you, but I find the anticipation of a sample sale is often better than the sample sale itself. Like Christmas day, once you’re in it, you realise it can never entirely deliver on its promise. Which is probably why I love the queue. I’m no masochist; I don’t want to freeze for hours. But I find a modest queue  —  one where you can feel the excitement building, one where strangers slide easily into conversation about their style, their wants, their recent scores  — a really rewarding experience.

“Is your jacket Needles?”

“No it’s Norbit”, I say, biting my tongue to stop myself bragging on about my Needles collection.

What I particularly enjoy is that sense that you’re not alone. All of a sudden you’re surrounded by people that feel the same about clothes as you do. Just a line of strangers all enthusing about shops, bargains and name-checking the grail pieces (at Story in London the Forager Jacket was the hot ticket.) It makes you feel less ridiculous. You realise you’re not the only one who sets their alarm for an online drop. You’re not alone in spending more than is ‘normal’ on a beanie.

“Did you go to the Goodhood one?”

Of course, as soon as you enter the sale, it’s everyone for themselves. The gossamer friendships formed in the line melt into a tug-of-war over a Polite Pullover. But that’s the game. I just enjoy the pre-match ritual. The catwalk of brilliantly dressed individuals who have to walk the full length of the queue to join at the back. People trying not to be caught sizing up what others are wearing. The faux nonchalance of it all, as people secretly boil with anticipation.

Less enjoyable is the crushing feeling you’ve worn the wrong thing. Do people dress up to go to sample sales? Course they do. Whether it’s an entry-level Folk x YMC x Oliver Spencer, or one of Comme des Garçons’ legendary Market Markets, killing it in the queue is mandatory. At Story I was virtually the only person not wearing Salomon trainers  — arguably I misstepped in buttoned-up in Comme. Everyone else was rocking Kappa x Palace, Needles and shit loads of oversized Story. No cap with a hood over the top? Who the fuck even are you?

After a 45 minute wait, I got in and nailed the top I’m wearing in the pictures. That was the physical takeaway, but perhaps, in a world increasingly lived through a screen, my emotional takeaway was even more valuable. A fleeting connection with strangers. A feeling of communal passion and identity. A sense of belonging. All conjured from a shared desire to buy a corduroy bucket hat.