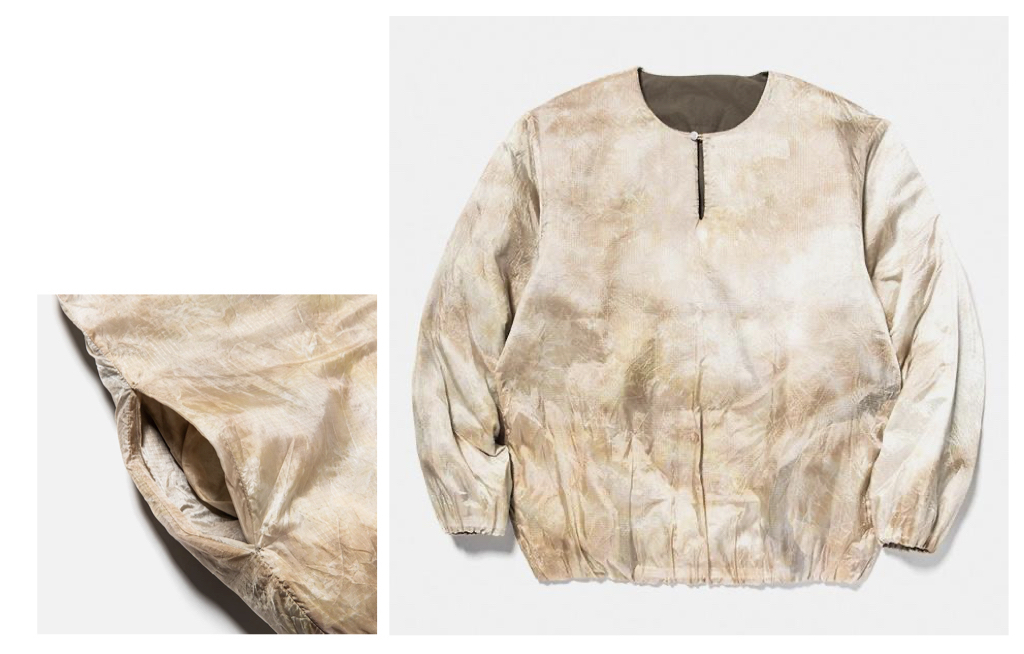 It’s not often I’m drawn to clothing that looks like a cell wall after a dirty protest. I don’t know about you, but I mostly prefer to dress in a way that avoids any association with excrement. There was that time in the playground at primary school, but that was less conscious choice and more involuntary humiliation. Being showered off by the PE teacher is not a good look.

Nevertheless, there’s something appealing about this murky looking pullover. Maybe it’s the techy Thinsulate fabric. Or the simple, baggy shape. Or maybe it’s just because it’s by rare-in-these-parts, Japanese imprint Meanswhile. If any brand can pull off the ‘scat enthusiast’ look it’s these guys.

If you’re not buying into this rampant pottiness don’t worry, check out the above: it’s a reverser. While looking like a walking stain has its own strange appeal, on balance I think I prefer the more conservative side  — flat, rather than smeared, brown, with three, let’s call them ‘action stripes’ across the midriff. A cool alternative to a generic knit I think. Shame there’s only one shot of this over on the Meanswhile site.

Further shame on me really, I’ve gone down such an unnecessarily faecal avenue with this piece, I’ve made myself feel queasy. I’m not really in the mood to ramble on about the artisanal dying technique passed down from the Meiji era, the waterproofness, the breathableness and the fact that those ‘action stripes’ form a series of loops you can use to hang accessories.

I’ve done this garment a disservice. Damn my puerile mind. My body may have grown since that day in the school yard, but apparently my brain is still stuck in the toilet.