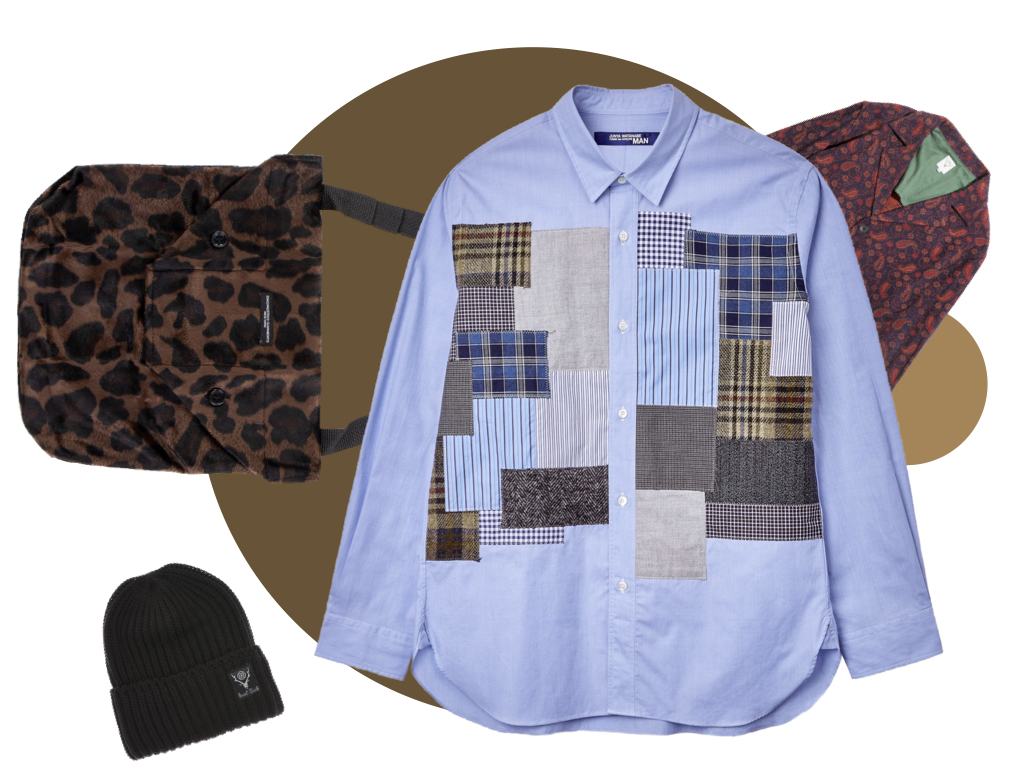 So, I’ve opened my Nepenthes-heavy gifts and now I’m browsing the sales for things I didn’t get and don’t need. What a despicable, grasping individual I am. As a child the hinterland post-Christmas and pre-new year was spent playing with new toys. But I’m already bored of playing with my new Needles sweater. I wore it for a Boxing day walk around a graveyard and now it’s not new. I’m sick of Tony’s Chocolonely. I’ve watched Wonder Woman 1984. I want more stuff. Wah-wah. Just hate me why don’t you.

What can I buy? What can I click on to give me that buzz of anticipation again? An easy win would be this South2 West8 hat. It’s in the sale over at Kafka for £45 (down from £65). I’m sorry to say, but dark brown is enjoying a mainstream fashion moment. I know this because I saw Rylan Clark-Neal head to toe in chocolate – he looked like a Cadbury’s Peter Sutcliffe.

The Dover Street sale is happening too. The insanely expensive Junya Watanabe shirts are now merely idiotically expensive. This is your classic Junya, with its preponderance of patchwork, its the sort of thing you think you probably should have owned back in 2010, but could never afford. Not sure how relevant this kind of thing is these days? It’ll cost you 262 quid to find out.

If no one else buys this South2 West8 paisley jacket from Nepenthes London I’ll probably end up doing so. When this first came out I thought it looked too much like a pyjama top. Now I know it looks too much like a pyjama top, I just don’t care. Not now I’ve seen people wearing Lidl Christmas sweaters. Sorry to burst the irony-bubble all you polyester Oscar Wildes, you’re just an advert for a shit supermarket. This jacket on the other hand, is an advert for the high life. Sophistication. Elan. M&S cheeseboard favourites. I want to wear this in a 1970s Kay’s catalogue, hanging out with bearded dudes in robes and thickly ribbed underpants, all just laughing for the camera, pretending to ignore the weirdly homoerotic mood in the room.

There’s nothing homoerotic about this bag. It’s Engineered Garments and it’s in the sale over at The Bureau  —  it was £86, it’s now an extremely specific £64.50. I think it’s fair to say that if you’re the kind of panicky chap who doesn’t want anyone to think you’re at all effeminate, or anything other than a bloody traditional, hard-as-nails, blokey-bloke this is the ideal bag for you. It looks like dead leopard. People will think you killed it, probably with your bare hands, with a punch or a strangle. Right before you made it into a handbag.

There is one other thing I want, but I’m not telling you what it is. It’s not in the sale yet and it’s been in my bag for weeks. One minute the site tells me my size is “low in stock”, then I look again a day later and it’s not, then it is, then it’s not again. You may think the con is on ‘shop I won’t name’, but you can’t fool me. I’ll wait as long as it takes. I’ve still got five more bars of Tony’s Chocolonely to get through.