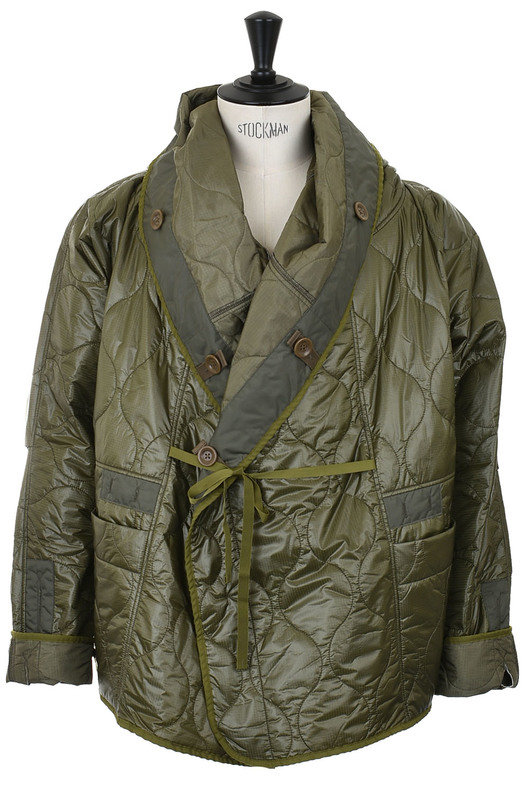 Kapital’s Ring Coat is well known amongst scholars of modern menswear. It’s an elephantine parka which, when fully buttoned, smothers the wearer like a dumpy succubus. Wear it loose and the swathes of fabric corrugate at the front like some kind of gynaecological oddity. The Ring Coat is not for everyone. But for fans of head designer Kiro Hirata’s twisted take on military attire, it’s a classic. You might already own one.

This is a Ring Coat, but also not — technically, it’s a Ring Coat liner. But as retailer Kafka point out, it’s perfectly good to wear on its own — a position I wholeheartedly endorse.

By far, this piece is most interesting from the front. It fastens with a tie-cord in a kimono style and in juxtaposition with the military feel and armies of fastening buttons (used to fix the liner to the Ring Coat proper) it’s a serious statement.

As we’ve discussed before, the appeal of quilting and quilted jackets in particular does rather depend on your ability to consign the ubiquity of coats like the Barbour Chelsea to the past. Of course, every day still, tube train escalators heave under the weight of 1000s of office rank and file in navy Barbour Chelseas. It remains a bro-friendly option, one that’s been embraced by those who don’t want to stand out, those who want to (un)consciously conform. But while, yes, this is a quilted jacket, it is also lightyears away from the Chelsea. You will not see a dude in pointy tan lace-ups and ‘fun’ socks wearing one of these.

I rather like its relatively short length too. I’ve got a number of longer coats which, when worn with wider trousers (most notably the terrifying Needles H.D Pant) make me look, well… frankly, too big — like a wafty potato of fabric, with a slightly too small man’s head at the top. This coat however, sitting mid-thigh, might work better with a generous trouser. On the other hand, it might not. I still might look moderately ridiculous. I really don’t care. I like this coat a lot.