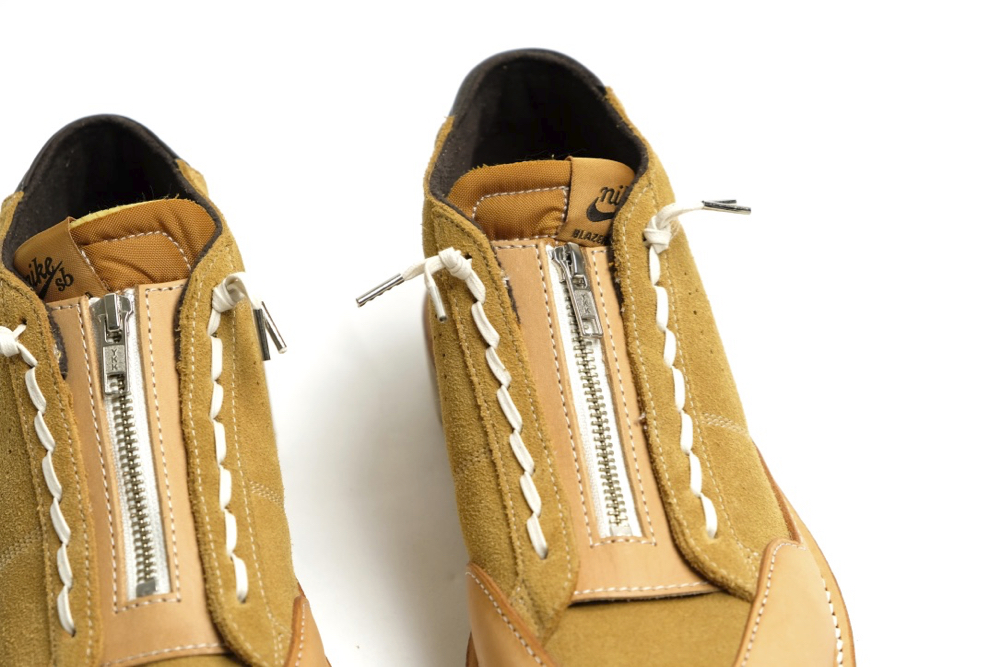 Look upon these shoes and feel reason begin to twist and rend.  What are they, why are they? They’re footwear, but how? Are they even man made? Or birthed from the very fires of Mephistopheles? Are they in fact alive?

Peer long and hard at these shoes people and watch as common sense takes a poo.

These are a one-off. Just this one pair in existence. Hardly surprising. To attempt to clone these wearable homuncului would be to risk feeling the tears of God on your back. It’s best this one, sorry affront to all that is holy is allowed to live knowing their twisted fate will never be repeated. Having said all that, I think they look pretty cool.

They in fact originate from a company called RECOUTURE, this pair having been contrived specifically for Japanese retailer Ray Coal. I’ll say now, they’re a size 9.5 US. So if that isn’t the specification of your hooves, you’re out of luck.

Based on the familiar Nike SB Zoom Blazer Chukka XT, they also feature a chunky boot sole unit, laces as decoration and a giant zip that looks hungry for human flesh. They’re a result of the whole ‘sneaker regenerative surgery’ thing – where the artisanally insane attempt to gene-splice different forms of footwear for their own twisted amusement. The results were never meant to be. And yet they live. Victorian sideshow freaks for the feet.

Move fast if you’re interested, as I say, there’s this one pair and that’s it. To purchase is to condone this creative malpractice. To sanction the enforced grafting of two separate entities into one profane aberration. But, as I say, they are pretty cool.