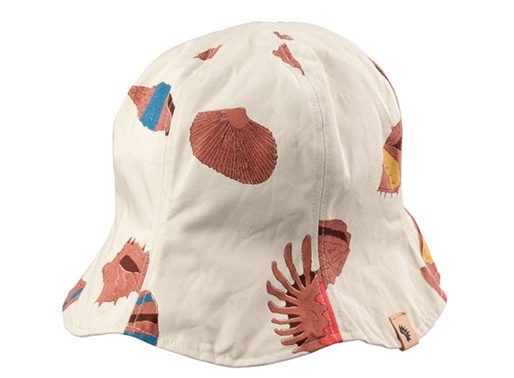 ‘Wilful ignorance’ seems a popular media phrase right now. It’s being served up every which way, usually to describe Trumpists, Pro-Brexiters, US gun-worshipers… The idea of deliberately choosing to ignore facts (based on a blinkered ideology) feels pretty alien to me. At least, I think it does? It’s impossible to analyse the myriad influences that have shaped my thinking and decision making during my entire lifetime. Perhaps we’re all wilfully ignorant on occasion? For example, I currently believe I would like to own this hat. This is motivated primarily by the knowledge that it’s by the brand Visvim. I believe this, even though the hat is shaped like a tulip, covered in printed shells and would make me look like a plague of cocks.

As is typical of Japanese websites, the images I have of this challenging headpiece are both small and few. Two to be exact. It comes in beige and grey – both feature crude daubing of shellfish. I have no idea if this represents some grand Visvim philosophy, I assume head designer Hiroki Nakamura just thought they looked good. I mean, really, that’s about it. It costs about 120 quid from this store in Japan and you almost certainly won’t buy it so there. Seriously, with the aforementioned idiocy going on in the world, you should be as ashamed of wasting your time reading this, as I am of writing it.