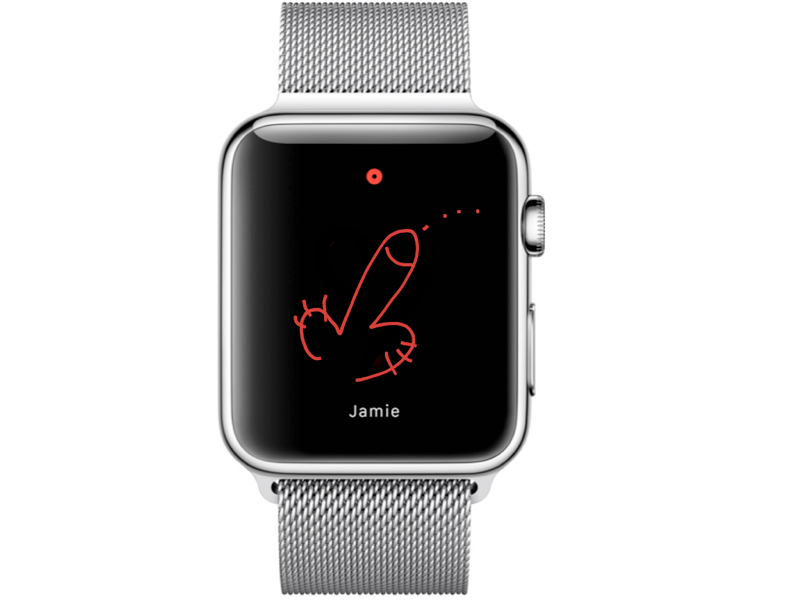 I wonder who’ll be the first person to use their Apple Watch to doodle a knob and send it to a mate? I expect someone over at Cupertino has already performed that vital ‘test’. Appropriate really, as I think you’d have to be a bit of a wang to want one.

Laptops, tablets, phones, MP3 players, they’re all tools. They can be cool tools, but tools nonetheless. A watch though… a watch is an accessory. It’s part of a look. If you wanna get poetic, it’s who you are, it’s a slice of your personality. Obviously, that’s complete rubbish. But, at the same time, it sort of isn’t.

I am totally acceptant of the fact that, to many, I sound like Mr VHS. I understand that, give it a couple of years, and rocking a watch that only tells the time, could seem as retro as having a phone that only phones people. I just, kind of, doubt it.

Mobile phones exist in the world of tech. Watches, live in the world of style, and I’m not a bro comfortable wearing what looks like a child’s doodle of a watch. There’s excitement around the colour, finish and strap options? Thing is, all that does is provide a quadra-ton of variations on ‘shit looking’. I mean, if I’d seen this picture a week ago…

I’d assume it was from Accessorize.

Yes, yes, I know. The whole point is you can pick a colour and a picture and a case and a other stuff… But it doesn’t change the fact that it looks swagless. Just look at this…

I’m not walking around with that on my wrist. And don’t be rolling that, ‘look they come loads of fun colours’ garbage at me. Colours are not fun. They’re colours. Cyan, is inherently no more fun than grey or navy. In fact it’s less fun. Because it’s shit. You know what happens when you buy something in cyan? You quickly wish you hadn’t, because it looks cheap. It looks like something an infant should wear. Same goes for magenta, lime, bright orange and the entire rainbow of ‘fun’ colours.

I don’t care what the Apple Watch does. I already know I don’t want to send someone a ‘vibration’ to show I’m thinking of them. Yes, to be fair, I’d send someone a drawing of a knob. But that’d get old real quick and I’d be stuck with a 300 quid timepiece. If ‘timepiece’ is even an appropriate description? Thingspiece? Stuffthing?

Even the Apple promo stuff is looking tired. Remember when Apple ads were kind of cool. Look at this…

Look at those grinning, handsome, multiracial stockshots. This image is so fucking inclusive, I feel excluded. And thus obviously, mortally offended. Where’s the granny? Where’s the miserable bloke from the Midlands? Fuck me, it’s like Kay’s Catalogue never happened. But I guess, it does illustrate what Apple were trying to do with their design. It’s for everyone. Multiracial, multisexual, transcurious, bi-peculiar, it’s aimed at everyone, right. Just not people with taste.

I’m not ready to morph into a Bay Area digilord, I have never screeched like a gay kettle at a list of technology specifications. I refuse to wear Dockers, a money belt and those fucking shoes that look like feet. I don’t want a computer on my wrist. I want something made by craftsmen, in Geneva.

People, rather than the design will define the Apple Watch’s real purpose. Like all tech, people will ultimately judge its necessariness, or otherwise. But not me, I’m going to sit this out. Of course, I know, one day soon, someone I know will want to show me his new Apple Watch. And he’ll be flinging his wrist about, acting like King Tits. That’s okay. I’ll be content in the knowledge that my watch doesn’t look like it was designed by Haribo.