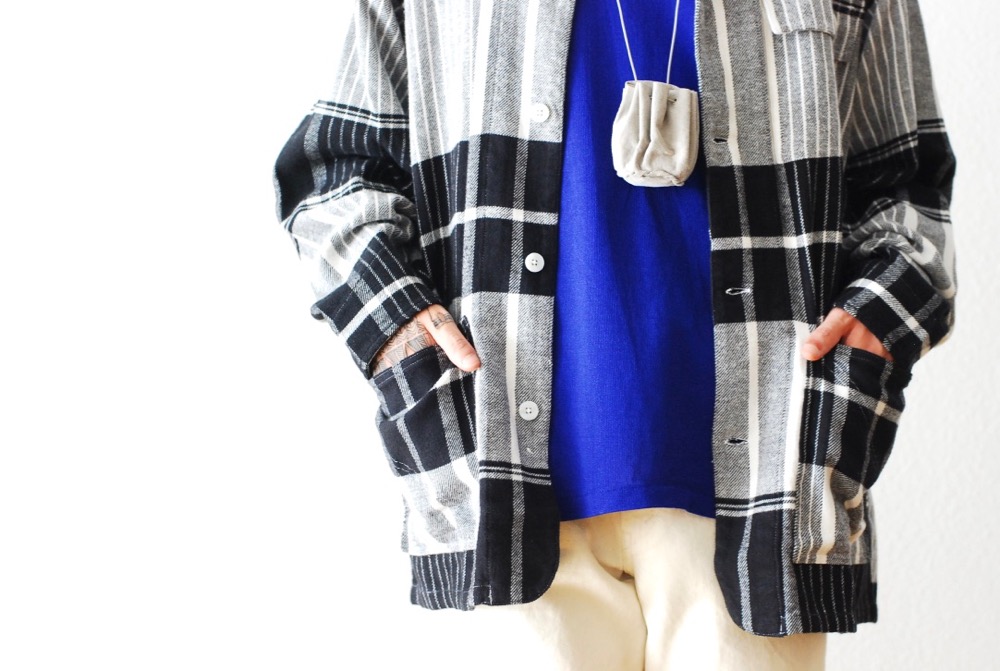 This is a nice enough day-to-day standard from NOMA t.d. Fundamentally it’s a cotton chore jacket, but the collision of checks elevates this from the domain of the labourer. It’s certainly an interesting jacket, but hardly a sensation. It’s neither dull enough for you to get lost in a crowd, nor dynamic enough to make someone embarrassed to stand next to you. How does that sound for an enticing Saturday afternoon read? I dunno, if you’re feeling as apathetic as me, the following just might be just the kind of noncommittal, lazy bullshit you’re looking for.

What else can I say… I like the way the guy in the picture is wearing it. I wouldn’t go with a royal blue tee myself, but on him, well, he just looks like the dudes always do in Japanese retailer Digital Mountain‘s shoots, significantly cooler than they realise. Look at his little neck pouch. I expect it’s full of meaningful pebbles and bits of dried flower. Over here a bouncer would whip that straight off and have you in an armlock in one swift move.

I tell you what, I’ve just had a gander at the price of this and it’s only £152. That’s direct from Japan mind you, so you can add the usual postage/proxy damages, but even so. For NOMA t.d. that’s a steal. I really wish the style itself only got me a little more excited. But I’m currently on my third episode of The Equalizer on Forces TV.  The Nik Naks are gone. My Yop is on the warm dregs. The only thing guaranteed to make me move now is if I run out of fags.